It was a sweltering 94 degrees that day.

The blacktop pathways from exhibit to exhibit were radiating summer heat, and the Mid-Atlantic humidity was overbearing.

My family went to the National Zoo in Washington DC to expose their kids to the sights and sounds of nature, but on that hot day, the only thing I noticed was the smell.

Specifically, I was hit with foul odors whenever we walked into the indoor exhibits. How could I have avoided it? It was hot, it was contained within a small enclosure, and whenever a new steamy glass door was opened, visitors were greeted with a new organic essence.

The smell of huge wild animals and their waste was intense and unlike anything I'd ever experienced.

From what I understand, my reaction was a very common one.  It's not unusual for kids to meet that part of nature for the first time in a zoo or circus and suddenly consider how much poop the zoo workers must have to clean up.

And then where does it go?

Most zoos, according to staff at Chicago's Lincoln Park Zoo, handle it with the rest of the zoo's solid waste and hauled off by waste management companies.

However, an increasing number of zoos in North America turn the waste into compost and fertilizer, some burn it as biomass heating, and yet others do both, turning it into electricity-generating biogas that has fertilizer as a byproduct.

A new Canadian project has turned this into a unique investment opportunity.

Its slogan is “Poo, Power, Profits.”

For the last five years, zoos across the world have been experimenting with turning animal dung into a mixture of methane and carbon dioxide that is fed into a gas-powered engine that generates electrical current.

This biogas is the product of anaerobic digestion. Basically, a giant vat full of bacteria digests the waste, and the process of digestion/fermentation yields fuel-quality gas and a solid matter that can be used as an organic fertilizer for crops.

The Munich Zoo in Germany began using elephant waste in this process in 2011, as did the Rosamond Gifford Zoo in Syracuse, New York.

Farms across the US have also taken up the process, but are selling the energy into the grid. An Australian company has begun using pig manure to create biogas in Utah in the Blue Mountain Biogas project. The biogas from that project is capable of powering 3,000 homes.

The American Biogas Council says the USA had over 2,200 sites producing biogas in 2012, with 191 located on farms. Around 1,500 anaerobic digesters were also located at wastewater treatment plants and 576 were located at landfills.

A new project called Zooshare will combine landfill-type waste processing with zoo waste to create biogas that could power as many as 250 homes.

The Zooshare biogas co-op will take 3,000 tons of manure from the Toronto Zoo, and 14,000 tons of inedible food waste from Canada's largest grocery chain and turn it into biofuel for the Ontario power grid.

Sent into a ”big concrete stomach” that operates at a dry 38 degrees celsius, the waste product then becomes biogas which is then converted to electricity. 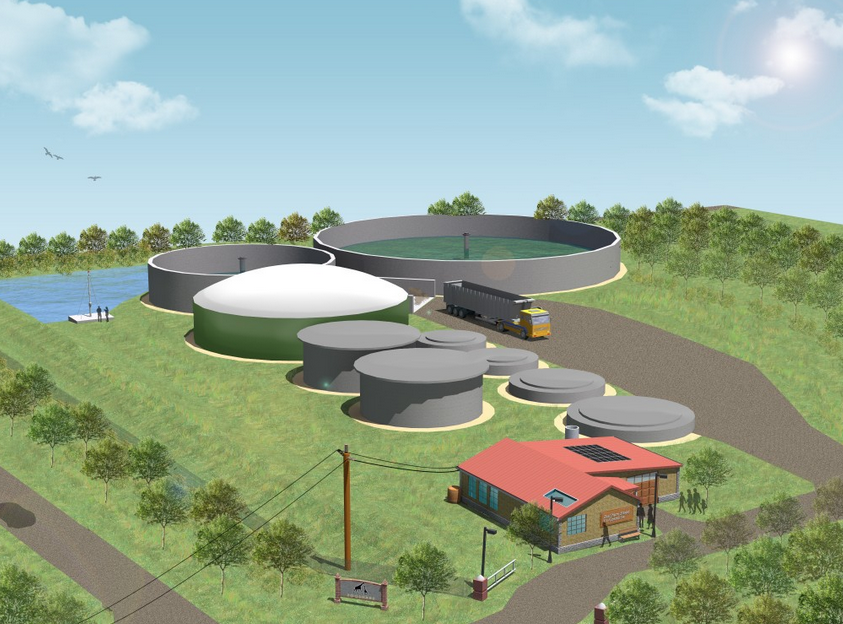 The image above shows what the biogas plant is expected to look like.  Right now, it doesn't exist. Construction begins July 2015, and it will be operational by December 2015.

Zooshare is selling bonds to help fund the project. With a minimum investment of $500, and a membership fee $10 per year, Zooshare is promising a 7% return each year for a 7 year term.

It's an attractive proposition because Zooshare has a solid monetization model that draws revenues from three sources. First, it will sell electricity to the Ontario grid --approximately 4.1 million kWh per year-- and the Ontario Power Authority pays according to a 20-year feed-in Tariff contract. Second, it will claim “tipping fees” for each ton of organic grocery waste it recycles from the all the grocery waste. Third, it will selling the fertilizer that is created as a byproduct of fermentation.

What's more, the 500kW facility is expected to produce a third of the Zoo's electricity demand and reduce its CO2 emissions by 10,000 tonnes.

Furthermore, when the fertilizer byproduct is used on the farms that grow food for the zoo's animals, it increases sustainability even further.