Suppose you worked at the Energy Information Administration (EIA), the agency within the U.S. Department of Energy charged with keeping data and making projections on energy, and you had to produce an annual report with a scenario for the next 25 years.

Being an intelligent and informed investor, you might grapple with the $147 to $33 range in oil prices over the last year and try to imagine how such volatility might happen in the future.

You might be tempted to model a few economic factors such as GDP growth rates and credit availability, and how they affect investment in energy supply.

You might take peak oil, peak gas, and peak coal into account, since the best available models on those subjects all suggest peaks within the time frame of your scenario.

You might extend the line tracing the 40-year trend of declining U.S. oil production.

You might look at the steadily falling prices of power generated from wind and solar and the steadily increasing prices from fossil fuels, and include those in your model.

You might take a cautiously optimistic view of the future of unconventional fuels like shale gas and biofuels, since their commercial history is short and good data is hard to come by...plus there are all those niggling questions about things like long-term production rates, net energy return and fuel-vs.-food tradeoffs.

You might include a tip of the hat, at least, to some sort of future pricing for carbon emissions, since it's all the rage right now and it seems likely that something will happen along those lines before 2035, even if this year's Copenhagen summit is a failure.

You'd wind up with thousands of linked, detailed spreadsheets, employing all sorts of advanced mathematical functions to tease coherence out of chaos.

And you'd most definitely ring the alarm bell that we've got a serious energy supply problem on our hands and we'd better do something about it, fast.

You'd probably point out that moving aggressively to renewables could solve the climate change problem, and do it without a global agreement on emissions.

But then, you're not working for the EIA.

Anatomy of an Illusion

You'd get out your crayons and your graph paper, and starting with your most recent data, you'd plot a nice, steady 1.5% global growth rate for energy demand over the next 25 years.

You'd do something similar for supply so that it matches demand at prices that also climb at a nice steady rate. For oil prices, call it, oh, how about 0.4% per year? That sounds pretty good.

You'd draw basically flat lines into the future for all the fuels dominant today, since you know they have serious challenges ahead, and then draw sharply rising lines for the latest and greatest technology, projecting enormous growth rates for things like shale gas and enhanced oil recovery.

You'd be sure to count all possible supply from new sources — like a new gas pipeline from Alaska — even if those projects don't yet exist. Hey, it could happen!

You would not, however, factor in any CO2 reduction, because policies to control it don't exist.

Naturally, you'd assume that the next 25 years would show gradual economic growth, so there wouldn't be any troublesome issues like credit availability or depressed consumer demand to worry about. 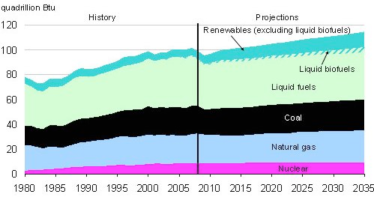 In sum, you'd present a picture of the future that looks like a continuation of the best parts of the past, with none of the bad parts.

You'd assert that the declining trend of U.S. oil production would be reversed by the miracle of technology, and grow from 5 million barrels per day (mbpd) in 2008 to over 6 mbpd in 2027, then flatten out for decades to come. You certainly wouldn't try to explain how that would happen while mature fields continue to decline — in fact, you wouldn't mention decline rates at all.

You'd explain that, even though domestic biofuels will fail to meet their 2022 renewable fuels target, they'll exceed it by 2035 as new sources that don't exist commercially today, like biomass-to-liquids and cellulosic ethanol, suddenly bloom.

To that you'd add some major gains from efficiency and "structural changes" like switching to hybrid cars — hey, what if the fleet of alternative vehicles tripled in the next five years? — eliminating about 90% of the new energy demand that would otherwise result from a constantly growing economy.

You'd do away with the problem that much of the U.S. nuclear fleet has to be rebuilt in the next 25 years because the reactors are past their expiration dates and living on extended operating licenses already, by assuming that they'll get another extension to operate beyond 60 years. So you won't have to worry about any loss in nuclear capacity.

Finally, you'd toss in a scenario for electricity production where renewables grow modestly then flatten out, while the use of cheap biomass suddenly explodes for unknown reasons.

You won't explain where that biomass comes from, or the net energy of using it, or any difficult details like that.

You'd continue the recent sharp growth curve for wind for a few years then flatten it out, perhaps because you don't think a storage solution will be found to address the intermittency issue. After all, it's not your job to know about emerging technologies like flywheel storage systems or V2G — it's your job to make the future look kinda like the past, only better.

And voilá! You'd be able to claim that U.S. oil demand peaked in 2005, and would remain flat around 19 mbpd for the next 25 years — even while the economy continued to grow. It's like magic!

It wouldn't bother you in the least that none of your projections use the best available information on these complex matters.

You'd be completely untroubled by the fact that oil prices averaged $74 in 2007, $100 in 2008, and $59 in 2009, but you drew straight lines into the future. Presumably, all that volatility owed to noise outside your sphere of consideration, and won't happen again.

You'd sleep just fine at night despite the obvious vapidity, in retrospect, of the oil price predictions in your 2004 annual outlook... nor would you be perturbed if I overlaid your 2010 prediction on it in chart form: 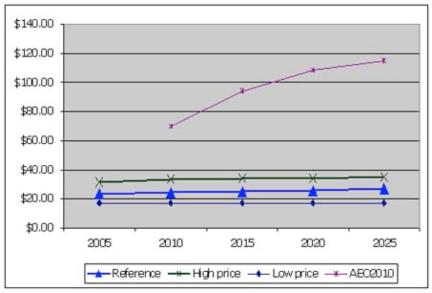 You'd be careful to follow the lead the IEA set in its recent annual report and arrive at basically the same prediction they did for future oil supply, while trying not to piss off your bosses.

You'd be sustaining the illusions that everybody around you believes in and supporting their religious beliefs about endless growth rates, American ingenuity, and so on. Nobody would fault you for that!

You could do all this secure in the knowledge that, apart from a few snarky financial bloggers out there who nobody reads anyway, you'll never be challenged on any of it. The press will dutifully report your projections verbatim, and won't ask you any difficult questions.

And when the business and policy leaders of America drive the whole enterprise off the net energy cliff because they relied on your expert opinion and neglected to invest in the renewable energy solutions of the future in time, you wouldn't worry your pretty little head about it.

After all, that's not your job.

[Author's note: This is based on the "early release" of the EIA's 2010 Annual Energy Outlook which offered only a summary press release, a slide deck of charts and some data, without the main text. Perhaps when the final report is released in March 2010 they will explain themselves better, but I doubt it. The EIA does an excellent job of collating and reporting historical energy data, but they should be statutorily barred from making projections.]

P.S. While the EIA may rule the data roost in the U.S., my colleagues Nick Hodge and Sam Hopkins scour a world's worth of energy info to bring Green Chip International readers top global clean energy stocks. To learn why more and more of the clean energy investment action is taking place beyond American shores, read Nick and Sam's new report: Racing to Build the Perfect City.