Oil Prices are Falling. Run for the Hills! 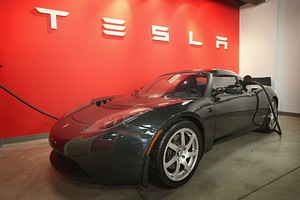 Saudi Arabia cut oil prices and crude fell all the way to $75.84 today.

Sell it, dump it, run for the hills!

How far will it go? No one knows. But hold on to your asses, because things are going to get crazy!

We're awash in oil, demand is waning, the Saudi plan to wipe out the U.S. shale market is underway.

Gas prices will fall back to $2.00 a gallon, everyone will be happy, gas-guzzlers will make a comeback, and electric cars are dead in the water. Take that you stupid treehuggers!

As you know, I hate low oil prices.

Low oil prices equate to lower gasoline prices. Lower gasoline prices chip away at the economic case for owning an electric car. As it is, that case is still a bit flimsy and will remain that way for a few more years until the Tesla (NASDAQ: TSLA) gigafactory starts pumping out cheaper batteries.

That being said, low oil prices are not a death sentence for electric cars – despite a lot of wishful thinking from those who have cursed Elon Musk since proving to the world that an electric car can be more than a glorified golf cart.

First, consider that the Saudis cannot shoulder price cuts for an extended period of time.

Saudi Arabia has its own economic issues to deal with, including some pretty burdensome unemployment rates. Back in 2012, King Abdullah actually announced a $130 billion plan to create jobs, build subsidized housing and support the religious establishment that backed the ban on domestic protests.

Some have suggested this outflow of capital was used as a way to maintain the status quo during the Arab Spring. I don't know whether or not that's true, but the Saudi economy is an oil economy. And while the Saudis are competing against the U.S. shale revolution, they must also balance those efforts with their plan to use less of their fossil fuel resources for their own consumption so they can sell them abroad at higher prices.

This is why we've seen such a big push for nuclear and solar power development in Saudi Arabia.

In any event, don't count on the Saudis for a long-term supply of cheap oil.

Demand is falling, and will likely continue to fall for some time. The global economy is not rebounding as fast as some claim, and increases in fuel economy for U.S. cars and trucks are having a small, but noticeable impact.

That being said, in the absence of another global economic meltdown (which isn't out of the question), I suspect demand will pick up steam again in a few more years.

Even if demand does remain stagnant, most shale producers can't frack for less than $70 a barrel. Because the U.S. economy is so directly tied to the price of oil, and because the U.S. government is so reliant upon royalties from oil production, I find it hard to believe that the state won't devise a plan to manipulate the price of oil in an effort to keep it above $70.

Of course, I don't have a crystal ball. And maybe I'm wrong. Maybe I'm just full of crap and I'm doing little more than picking at straws here. But for the sake of electric vehicle adoption, I'm not even so sure cheap oil even matters.

Perhaps it does more for the less expensive electric vehicle models, like the Nissan LEAF for instance. Which, incidentally just broke its own record for most electric cars sold in the U.S. in a single year. To date, Nissan has sold more than 66,500 LEAFs in the United States.

But for a company like Tesla, it's not entirely relevant.

Folks who can shell out $85,000 for a Tesla Model S don't tend to be the types who worry about the price of gas. These are innovators and early adopters. They chest pound over access to new technologies and love nothing more than to show off their shiny new toys.

You also have environmentalists who will happily forgo cable or financial security in exchange for an emissions-free vehicle.

Point is, Tesla is at no risk of being sideswiped by cheap oil. The company is a beast, and even if it craps the bed on Q3 earnings tomorrow, it's not going away. Tesla is here to stay. It's going to continue to disrupt the hell of the auto market, and no amount of Saudi influence, state manipulation or demand destruction in the oil space will change that.