Coal is a Loser's Bet

Another coal giant has gone violently into that good night …

I’ve been warning against coal stocks for a couple of years now. The dual threat of cheap natural gas and massive cost reductions for renewables has simply driven a stake through the heart of coal-fired vampire that has longed sucked the life blood out of our natural capital.

While I wish no ill will towards anyone trying to make a buck by providing a good or service, I won’t be shedding any tears for this one.

I’m not really a fan of companies that like to blow the tops off of mountains and destroy the livelihoods of folks that have the misfortune of living downstream from irresponsible mining operations.

Of course, even with ANR’s corpse being wrapped in in black-stained gauze, its legacy will remain.

I hope ANR can resolve the issue without further hurting the planet! You know, the thing that provides water, air, and soil for its creditors - all free of charge.

If a solar or wind farm developer goes bankrupt, will there ever be such an issue?

The resources - which are clean, free and provided by Mother Nature - are of no threat to our air, water or soil. And as long as those turbines are spinning and those solar panels are still converting sunlight into electricity, there is value.

An abandoned mine with loads of stuff that few really want or need anymore? Not so much.

I’m not saying coal will never be a part of our energy mix. And certainly there will always be demand for metallurgical coal. But with the fall of Alpha Natural Resources, investors should take note: Coal is a loser’s bet.

But in case you need a reminder … 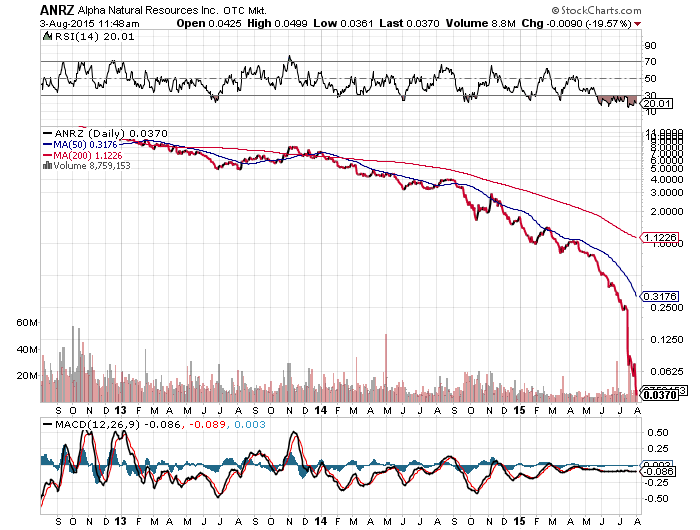