Only a Fool Would Bet Against Whole Foods (NASDAQ: WFM) 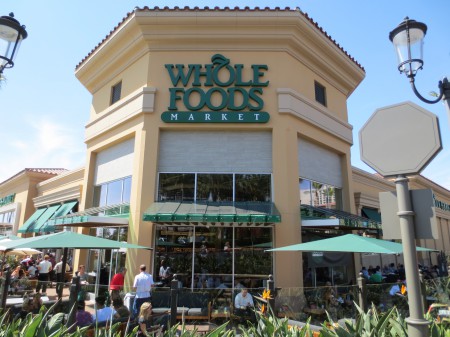 So today's metaphorical middle finger goes out to the waning legions of Whole Foods haters.

After years of being one of the biggest cheerleaders for Whole Foods (NASDAQ: WFM), I've witnessed a remarkable thing …

No matter how many times Whole Foods crushes it, there's at least a dozen or so analysts that continue to warn about the illusions of competition from Big Box stores and a market for organic and natural foods that has peaked.

Neither are true, and in fact, one couldn't be true over the other. If demand is soft, then why do Costco and Walmart carry a crap ton of organic foods now?

In any event, I was extremely pleased to see that the company delivered a 6 percent increase in Q1 profits, which beat Wall Street estimates.

Tech is your Friend

Technology seems to be on the side of Whole Foods now, with 5% of all sales coming from grocery delivery service Instacart. This has resulted in average online delivery sales of more than $1 million per week. The company also pulled about 2 percent of sales from Apple Pay – Apple's mobile device payment card.

We attribute our broad-based sales momentum to our customers' positive response to our many strategic initiatives, along with improving consumer confidence. Changing technology has fundamentally altered how and when customers choose to connect with us, and we are rapidly building out an extended experience beyond the four walls of our stores.

Beyond the positive results for Q1, I also remain extremely impressed by co-founder John Mackey's plans to transform healthcare. And one thing's for sure, these plans look a hell of a lot more exciting than anything the government's come up with.

As reported in Bloomberg …

One idea he’s working on is a sort of weight loss and nutrition camp for employees and customers. It’s based on a program called Total Health Immersion, a weeklong clinic that Whole Foods employees can attend for free, where they undergo medically supervised testing, group discussions with nutritionists, and cooking classes. Mackey wants Whole Foods to offer Total Health Immersion to customers as a healthful weekend getaway. He says he’s negotiating to buy a property in Austin, and “if it works here, there’s no reason we can’t do it in every major city in the U.S.” He sees a huge market need, as he once did for organic foods. “Americans are sick of being sick,” he says. “They don’t know what to do, and there’s so much misinformation, which is why we started Whole Foods in the first place.”

Mackey’s second idea is even more grandiose: a Whole Foods medical clinic. He says he was inspired by Rosen Care, an employer health-care program run by Rosen Hotels & Resorts in Orlando, which offers employees an on-site company-owned medical facility. The clinic has a staff of 38 health-care practitioners serving 5,300 employees and places an emphasis on nutrition and preventive medicine, which company founder Harris Rosen says has reduced his per-employee health-care costs to about half the national average. Mackey met Rosen at a health-care conference last summer in Las Vegas, then traveled to Florida to tour the clinic. He’s considering rolling out Whole Foods clinics to employees—and even, perhaps, to customers.

“Health care is so broken in America,” Mackey says. “If we allow markets to work, if we allow entrepreneurs to get in here and do things like I’m talking about doing, we will pretty much solve the health-care problem in a generation.”

You can read the entire interview here.