Where Electric Cars Live in the United States

How Many Electric Cars Live in Your Neighborhood?

Last week, Edmunds.com published a list of states that had the highest and lowest percentage of electric car registrations. 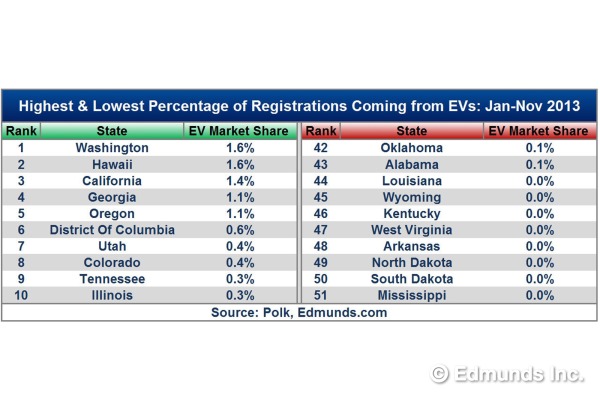 Of the top ten, you have four states (California, Colorado, Oregon and Washington), plus the District of Columbia – all strongholds for liberal types who love electric cars. This is not, by the way, a criticism. Merely an honest observation. As well, gasoline tends to be a bit on the pricey side in these states.

Hawaii actually boasts the highest gasoline prices in the nation, so there's certainly an economic incentive in paradise.

Folks in Tennessee build Nissan LEAFs, so I suspect there's a connection there, and the state of Illinois ponies up $4,000 in tax credits for electric car buyers, as well as a 50% rebate on home charging stations. Georgia also has a very generous program that offers a 20 percent rebate (up to $5,000). The only one I'm uncertain about is Utah. But I plan to look into that.

On the other side of the coin we have a number of states with small metropolitan areas and a lot of open land. Not a good combination for electric vehicles which currently have all-electric ranges cutting off at around 80 to 100 miles per charge. Unless, of course, you count the Tesla Model S, which can deliver up to 300 miles per charge. It's a beautiful car, but given the median income in those states is rather low, you're probably not going to find a lot of folks in those areas with $70k to spare for such a magnificent machine.

No, on range, electric cars are perfect for places like Seattle, Portland, Los Angeles, Washington D.C. and Chicago. Not so much, however, for all ten of the states listed as having the lowest percentage of electric car registrations. These are: Oklahoma, Alabama, Louisiana, Wyoming, Kentucky, West Virginia, Arkansas, North Dakota, South Dakota and Mississippi.

Renewable Energy Predictions 2030
It's hard to believe, but if this energy expert is correct, oil, gas, nuclear, and coal may be nearly obsolete by 2030. Solar and wind will power most of the world, and electric cars will take over where internal combustion leaves off.
The End of OPEC
It may be that cheap energy is a precursor to industry, but it's not a guarantee. One country, Saudi Arabia, has used its vast oil profits to build the most lucrative welfare state in the world...
Clean Energy Fuels (NASDAQ: CLNE) Pushing Toward its First Profit?
Interest in Natural Gas-powered vehicles has slowly increased over the last three years. As a result, Clean Energy Fuels is expecting to reach profitability for the first time in the company's 17-year history.