Before the decision, there had been a modest proposal in place to restrict the growing of GM alfalfa in order to protect organic farmers against cross-contamination of their organic and conventional crops...

But the Secretary (if I may coin a term) Vilsacked that proposal and gave agro-behemoths like Monsanto totally unrestricted approval to blanket the U.S. with GM alfalfa, which is genetically engineered to resist prodigious amounts of Monsanto's Roundup pesticide.

This flies in the face of the pledge for “co-existence” he called for in the weeks leading up to the decision.

Vilsack had said “We have an obligation to carefully consider USDA's 2,300-page Environmental Impact Statement, which acknowledges the potential of cross-fertilization to non-GE alfalfa from GE alfalfa — a significant concern for farmers who produce for non-GE markets at home and abroad.”

So why the about-face?

Why sack the modest restrictions meant to protect the relatively small and vulnerable organic farming industry from the Pandora's box of GM crops?

There's no shortage of speculation about who's really pulling the strings...

When he was Governor of Iowa, he was even chauffeured around in a Monsanto private jet! He's also been a cheerleader for the bio-tech industry, receiving the Biotechnology Industry Organization's (BIO) "Governor of the Year Award" in 2001. 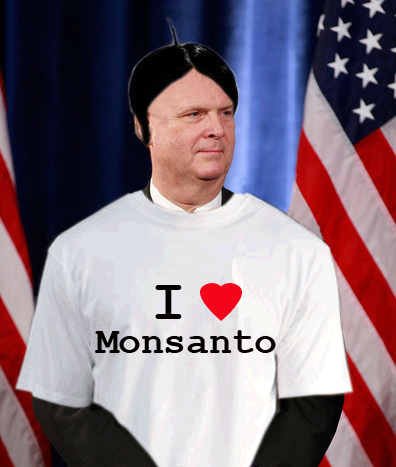 So it was no surprise that BIO President Jim Greenwood cheered the most recent decision, telling the Wall Street Journal, "we hope this will help pave the way for new technologies in the pipeline."

Other media outlets have implicated the Obama administration in strong-arming Vilsack into nixing any restrictions on planting GM alfalfa, as Tom Philpott points out at Grist.

The WSJ reported the Obama administration had been reviewing all government regulation to "weed out" any proposals that are burdensome to businesses, and that the alfalfa decision echoed a larger initiative to restore Obama's credibility with business leaders.

Now, correct me if I missed something, but aren't regulations intrinsically burdensome?

Even toothless regulations should involve some sort of pressure!

Even David Axelrod weighed in on the issue at a White House meeting, telling those in attendance to “plow forward” on the genetically produced alfalfa issue, according to Maureen Dowd.

Alfalfa is the fourth largest crop in the United States acreage-wise, and serves mostly to feed cows and horses.

But the precedent set with alfalfa couple have serious ripple effects as the USDA oversees approval of other, even more prevalent GM crops like corn and soybeans...

In the meantime, the Center for Food Safety (CFS) is seeking to fight the decision, claiming the USDA's environmental impact statement was inadequate.

“We’re disappointed with USDA’s decision and we will be back in court representing the interest of farmers, preservation of the environment, and consumer choice” said Andrew Kimbrell, CFS's Executive Director said in a press release.

“USDA has become a rogue agency in its regulation of biotech crops and its decision to appease the few companies who seek to benefit from this technology comes despite increasing evidence that GE alfalfa will threaten the rights of farmers and consumers, as well as damage the environment.”