The Strange Future of Public Transit

The push for a greener tomorrow has led scientists, architects, engineers, and designers to explore new avenues in all types of technology and building. Among the most important areas of focus in this new age of exploration is public transportation. As the population is encouraged to rely less on individual cars and more on public transportation as a means of reducing pollution, it is incumbent upon those who design and build modes of public transportation to improve their efficiency, reliability, and convenience.

“As public agencies are being asked to do more with less, investing in smart technology is critical for improving system efficiency, optimizing the public’s return on investment, and creating a more connected transportation network,” said ITS America President and CEO Scott Belcher.

With this goal in mind, dozens of new concepts for vehicles, energy-generation tools, and transportation hubs have emerged over the last decade, all incorporating a unique combination of cutting-edge technology and visionary design. Below are ten of the most creative and bizarre ideas buzzing around public transportation. Some are still in the earliest stages of conceptualization, while others have already been successfully implemented; but all may well find their way into our daily lives in the not-so-distant future. 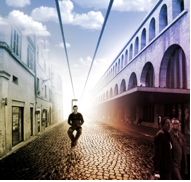 Bulgarian architect Martin Angelov originally designed the concept of the Kolelina City Zipline as a means of moving cyclists. But the idea of setting up a network of cables strung above the city skyline has transformed, and is now envisioned as an affordable, eco-friendly way to transport commuters, who would move along the cables by way of battery-powered backpacks. Angelov’s design has yet to be made into a reality, but could be a feasible solution to cutting down on emissions from car traffic.

Tokyo’s subway system is among the busiest in the world, with millions of commuters passing through each station every day. Recently, the Japanese government decided to harness the power of all that foot traffic: in two of the city’s biggest and busiest stations, they’ve installed 25 square meters of piezoelectric energy-generating flooring tiles in front of the ticket turnstiles. The tiles, made of layers of rubber sheeting and ceramic, absorb the vibrations from individuals’ footfalls and capture the resulting energy. The combined energy, which yields about 1,400kW/sec per day, is then stored in capacitors and channeled to the station’s ticket gates and electric lights and displays. 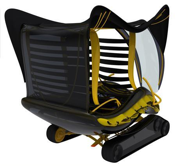 The Taxius Animalis is a one-person taxi, made of touch fabric and other lightweight, eco-friendly materials, that uses electric power to transport commuters from Point A to Point B in cities. The idea is still in the early stages of design and conceptualization, but offers a potentially viable way for commuters who don’t wish to operate their own vehicles to contribute to lowering fuel emissions.

Congress has appropriated $1.1 billion to Illinois for the development of a high-speed railway, as part of an $8 billion nationwide initiative. Once built, the high-speed rail system will represent a significant landmark in the shift to green transportation on a national scale. And Chicago will play a major role in this system, acting as the hub of Midwest rail network. As such, the new station that will be built to accommodate these trains and their clientele is envisioned as a cutting-edge, airport-style facility, with retail and amenities for travelers as well as a tower for offices and other business uses — all built and run on green technology. 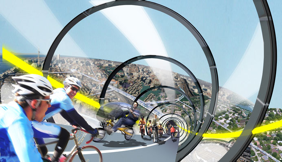 Velo-City is a closed-in, elevated network of paved tubes that serve as pathways for bicyclists and roller bladers. Though in the conceptual design stages, Velo-City may soon become a reality in Toronto, Ontario. Enclosed and protected from the elements, Velo-City would provide a safe, efficient, low-cost, and highly eco-conscious way for Toronto’s citizens to commute.

As far-fetched as it sounds, an airship powered by algae is not even close to the least achievable goal on this list. In fact, it’s already a reality: the Bullet 580, a 235-foot inflatable airship powered by algae, has been built and successfully inflated, and is being readied for a test flight. The airship is covered with a special type of Kevlar, the inner hull filled with ambient air while lift is provided by a system of helium-filled bags.

The Wheel Rider is a single-person vehicle comprising three layers: a protective outer body, the wheel itself — which has a diameter of nearly six feet — and the inner chamber, which has a seating area, controls, and storage space. Conceived by Japanese designer Yuji Fujimura, the Wheel Rider is still a concept car, but Yamaha is researching different avenues to bring the vehicle up to stringent green auto design standards.

Today’s helicopters play an integral role in military, media, and medical operations, but are too disruptive and energy inefficient to be considered for daily use. But NASA is working on improving helicopter technology with the goal of designing a fleet of future helicopters that could carry as many as 100 people, with lower emissions and less noise pollution than today’s models. In particular NASA is focusing on SMART rotor technology, experimenting with the materials, shape, and performance of the rotor blades in order to increase the distance a helicopter can fly on the same amount of fuel.

Architect Garth Pearce founded MonoMetro in 1997, based on his design for a narrow gauge suspended railway. The technology has since been adopted by many of the world’s foremost transportation engineers and fabrication specialists, and a number of governments and corporations worldwide are considering large-scale adoption of the MonoMetro. Cost-effective, energy-efficient, safe, and reliable, the MonoMetro is in the final stages of approval in Saudi Arabia and the UK.

The Rail Cab is a design for a modular railway system that updates existing railway lines and infrastructure with cutting-edge, wear-free 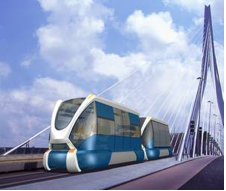 linear motors. A feature of the Rail Cab system are small, remotely controlled vehicles that can carry passengers or cargo from place to place with no additional stops or layovers. The Rail Cab design is envisioned as both a replacement for traditional freight and passenger trains and as a vital new part of individual public transportation.

* A version of this article originally appeared on Well Home.