I've heard all kinds of remarks since T. Boone put the brakes on one of the world's largest planned wind farms last week.

Hardly any of them have been good, most of them are even using this to signal the death of renewables.

The death of renewables? Phooey.

This is the death of T. Boone's grandiose wind plans. Nothing more.

He's still in the wind business per his own admission. He's still going to employ the $2 billion worth of GE wind turbines he's already purchased. He's just not using them all at one giant wind farm, mostly due to Texas' lagging in building out transmission.

Here's some data the media and the uninformed seem to be forgetting about.

First of all, let us not forget that the turbines for Pickens's giant 4,000 MW wind farm weren't even scheduled to be delivered until 2011.

Let us also not forget that even though the large farm is being canceled (or delayed), Pickens is still going to use the 687 turbines he's already purchased by building "three or four smaller wind farms, at a cost of some $2 billion."

Lastly, let us not forget that we're in the middle of a capital calamity. Bear Stearns is gone. Merrill is gone. Chrysler is gone. So are countless other businesses, brands, pensions, and plans.

Is it that shocking that renewable energy plans are slowing as well?

Renewable energy is a lot of great things, but it's not recession-proof.

Was this bad press a psychological blow for cleantech? Absolutely.

Is it the end of the industry and its profit potential? Absolutely not.

In reality, this is simply Boone being Boone, pursuing business as usual. The recession put a bump in his road, and he's nimbly navigating around it.

According to the billionaire, "We're going to be active in the business. It's not that we've gotten out of the business or anything like that."

And according to the spokesperson for his BP Capital Management firm, "Boone still remains committed and focused on developing wind energy in the United States. The timing is not as aggressive as he originally outlined because of the collapse of the capital markets and because of the steep downturn of natural gas prices."

So, I have two questions:

Is there a major industry that hasn't been stymied by the drying up of easy capital?

How does adapting to the current business environment signal the end of an industry?

Let's just take this for what it is, fallout from the recession.

And by all means, let's not through the wind baby out with Pickens's bathwater.

Indeed, it seems the Pickens event was enough to give naysayers a few last breaths in recent days.

I've even heard it put as bluntly as "Nobody gives a fu** about the climate right now."

I'll let the G8 comment on that. Just last week those leaders agreed "to limit global warming to 2 degrees Celsius and cut its greenhouse gas emissions by 80 percent."

And while I'll concede that climate change has taken a partial backseat to economic turmoil, the energy problem certainly hasn't. It's often overlooked that we're pursuing, investing in, and trying to expand renewable energy — not renewable climate change mitigation techniques.

That said, wind energy is actually looking quite strong.

Recent reports from major European turbine producers like Vestas, Gamesa, and Nordex all point to a second-half recovery for wind financing. Most have nearly signed enough contracts to meet their 2009 fiscal sales and revenue guidance, with July and August being typical months for large wind orders.

And after this recession, wind energy will emerge even stronger.

29 of our 50 states have passed and signed into law some form of a renewable portfolio standard. That means the increased use of renewables is being mandated by law. Some five other states have similar voluntary measures, the House has passed a national version, and the Senate is about to consider it.

There is no legislation on the table to mandate the use of any non-renewable fuel.

Also going unnoticed are the tools being used to combat this recession on a global scale. In the rush to pass stimuli, renewable energy has emerged as the frontrunning combatant.

Since late last year, hundreds of billions of international dollars have been pledged to boost the use of cleantech as a path to economic prosperity.

In China, a recent $15 billion initiative will double their use of wind energy in the next year from 12,000 MW to nearly 30,000 MW. This is part of a bigger Chinese cleantech program that will spend $290 billion by 2020.

When it comes to global totals, the use of wind energy will double by 2013 and triple by 2016. 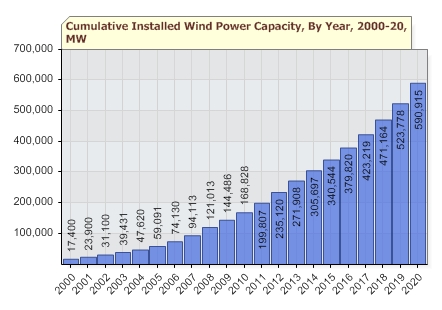 No non-renewable energy source will see that type of growth in the coming years. Period.

To Infinity and Beyond

This last fact is also often overlooked or misused to decry renewables.

Yes, renewables currently only account for a fraction of global energy use. But this isn't a bad thing. It means there is plenty of room to grow.

Renewables are the ground floor. Fossil fuels are slowly vacating the penthouse.

This is why the growth numbers are so astounding. . . and the investment potential so high. When you start at 0.1% of the energy mix, it's easy to double, triple, quadruple, and more.

The upside is a century long.

And losing they are, even if Pickens is the one making headlines.

You see, while one wind farm cancellation dominated headlines last week, it went largely unnoticed that the 100th coal plant was canceled since 2002.

Not the first. . . the 100th. It certainly seems worse for coal than wind.

Because while states are passing laws to increase the use of renewable energy, Los Angeles said last week that it will stop using coal-fired power altogether by 2020. What's more, according to Reuters, "No utility-scale coal power plants operate in California anymore, and the state has banned new contracts for imported coal power."

So, for a quick exercise in logic:

T. Boone still wants to build his wind farm and pursue wind energy, but a lack of financing and transmission capacity have forced him to alter (not cancel) his plans.

100 coal plants have been cancelled in the past 7 years. And there's a movement, led by California, to ban their future use altogether.

For which industry is this news worse? You decide.

P.S. Better yet, let your portfolio decide. The Alternative Energy Speculator is proving cleantech is the real deal with each and every closed winner. We proved it 27 times in the first half of 2009. Click here to read about our latest profit play and join thousands of other savvy investors who know clean energy is here to stay.