A Justified Panic over Fracking? 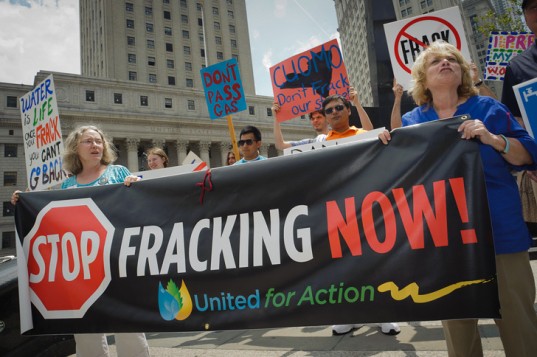 Harold Hamm, the fracking king who recently wrote his ex-wife a check for $975 million to settle a divorce, is back in the news.

This time, though, it has nothing to do with a nearly $1 billion divorce settlement.

No, this time Hamm is causing a stir because of something he said in a recent interview with Christopher Helman of Forbes Media. Check it out ...

“Russia’s spent a great deal of money over here to cause a panic in the United States over fracking to stop it, because suddenly their market share is going away. There was a lot of money spent in the U.S. to send people into a panic over fracking because they wanted to stop what we were doing. They saw this coming,”

While I don't doubt the Russians would be happy to finance any movement that hurts the U.S. oil production boom, you can't blame Vlad Putin for this one.

The truth is, environmentalists, for the most part, just hate oil.

Sure, they still use it in their daily lives, but that doesn't stop them from lashing out against the “Big Oil” machine. And certainly some of their hostility is justified.

You know, it wasn't the Russians that discharged 5 million barrels of oil into the Gulf of Mexico.

It wasn't the Russians that built the fracking disposal wells in Ohio where 400 earthquakes were triggered over a 3-month period.

It wasn't the Russians who contaminated thousands of people's wells that happen to be located close to fracking operations, and it wasn't the Russians that were cited for spilling oil and brine into two streams in North Dakota. No, that was actually Hamm's company, Continental Resources.

Understand, I'm not writing this today to criticize fracking or oil production in general.

Certainly there are plenty of companies that are trying to produce domestic oil in a manner that causes the least amount of environmental damage possible. And quite frankly, it's really just been a handful of bad apples that have dismissed the value of natural capital in an effort to squeeze a few more bucks out of their operations.

Of course, that doesn't mean I'm a fan of our continued reliance on oil. I maintain that the internal combustion engine is a dinosaur and unless we all want to live as knuckle-dragging Luddites, we would be wise to embrace alternatives to internal combustion.

However, in the meantime, guys like Hamm need to realize that not everything is a fucking conspiracy. Maybe, just maybe, people are sick and tired of the government and unethical corporations treating the planet like their own personal toilets. And if unethical oil producers want environmentalists to back off, they should just stop vilifying them and start taking the appropriate measures to ensure they respect the environment instead of shitting on it.

And for environmentalists that are fed up with the way some of these oil producers do business, trade your old car in for an electric vehicle, start taking public transportation, or walk more. Kicking and screaming only pisses people off, but taking personal responsibility for your actions will deliver immediate, and much better results.