Local Supply is the Name of the Game

I speculated in my article last week on how Southern California and Arizona might fare in a relocalized future where small regions are forced to become self-sufficient.

This week, we'll draw some insights from communities that have gone local.

Following two previous unsuccessful rebellions in 1852 and 1854, residents of the area from roughly Mt. Shasta in Northern California to just above Coos Bay in Oregon made a serious attempt to secede from the states in 1935, out of frustration over the lack of state support for their critical transportation infrastructure needs.

A Time magazine article from 1938 lauded the area's "rich deposits of chrome, copper, gold, iron, coal, limestone, and platinum beneath an evergreen blanket of several billion feet of virgin timber," which remained largely inaccessible for a lack of good roads and rail.

It described how a local self-made resource magnate named Gilbert Gable had tried to get approval from the Interstate Commerce Commission to build a rail link from Port Orford over the mountains to the Southern Pacific rail line 50 miles inland, in order to bring the region access to eastern markets. A rival group made its own bid for a rail connection from the SP line to Crescent City, on the California-Oregon border.

Both applications were denied by the ICC. The examiner commented, "Recent army reports show that the prospect of future growing importance of the ports of Port Orford and Crescent City definitely may be discarded as a factor of consequence in this proceeding." 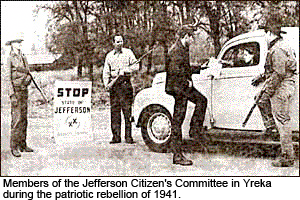 Frustration grew until November 27, 1941, when the residents created a provisional government and elected a governor, declaring themselves the State of Jefferson, the 49th State of the Union. A Proclamation of Independence was published and pamphlets were distributed. Armed citizens put up road blocks on the main north-south artery of U.S. Highway 99 where they collected tolls for crossing their new state line.

The Proclamation's intent was clear: "Until California and Oregon build a road into the copper country, Jefferson, as a defense-minded State, will be forced to rebel each Thursday and act as a separate State."

One week later, amid much fanfare, the state's new governor was inaugurated in Yreka. Signs had been posted around town saying: "Our roads are not passable, hardly jackassable; if our roads you would travel, bring your own gravel." Hollywood showed up and shot some newsreels.

But three days after the inauguration, the whole thing was over with the bombing of Pearl Harbor. The nation united behind the war effort and built good new roads into Jefferson to access its much-needed copper and timber.

Some useful observations can be drawn from the Jefferson experiment.

First, it highlights the importance of getting resources to market. In an age when declining fossil fuels increasingly jeopardize truck transport, alternatives will be needed.

Locals may have to find ways to finance the rail and ship transport infrastructure for their goods — even if they have to do it on their own. Government officials are typically shortsighted about securing critically important infrastructure.

Second, it demonstrates that even in the not-too-distant past of the U.S., regions can (and will) secede if the support of larger entities fails. The notion that our union could fall apart under the pressures of the coming decades is hardly outlandish.

Indeed, I didn't have to wait long for the fulfillment of my prophecy last week that California should expect another debt downgrade. This week, S&P cut its rating on California's $63.9 billion general obligation debt from A to A-. More severe budget cuts are sure to follow, starting with health and human services. As the budget squeeze rolls downhill, it's forcing counties and cities to follow suit.

Issuing IOUs to state residents instead of tax refund checks is one thing; but when schools, law enforcement, food assistance, and basic transport begin to fail, it's another thing entirely. The impact of such cuts always hits the welfare and working classes first... people who would rally for secession if their state and nation failed them.

I have personally heard locals near the southern Mendocino County border joke about blowing up the Highway 101 Bridge in Hopland, if the worst should happen and hungry hordes from Southern California begin to migrate north. I've also heard residents of the redwoods have no great love for those of the plastic lands.

Some thought experiments may be useful here.

If our critical infrastructure were to become unreliable as state and federal unions fail, which communities would fare best? Those utterly dependent on freeway transport, like Dallas; or those with ample rail, seaborne, and pipeline capacity, like Houston? Those who can disconnect from the grid, like Texas; or all the other states, which cannot?

As Scott Pugh of the Department of Homeland Security said at the ASPO conference last year, "Texas can secede from the union any time they think they should."

And where would the boundaries of the new regions be drawn? Would I, as a resident of the Bay Area in California, prefer to end up in Mexicali, with its massively overbuilt and overpopulated deserts... or in Jefferson, with its low population, timber and minerals, farmland, ample rainfall, and a working rail and port infrastructure?

Where would offer the better opportunity to secure a food supply within a 100-mile radius: Las Vegas, or a town in rural Iowa?

Which has the most old-school, low-energy shipping infrastructure to fall back on: Baltimore or Chicago?

Another type of secession is playing out right now, right here, which could become a model for the rest of the country.

In 2002, California passed a state law (AB 117) allowing communities to form their own entities to buy electrical power as so-called Community Choice Aggregations (CCAs). The notion is that CCAs could choose to buy more renewable energy than the existing investor owned utility (IOU) monopolies provide, while those utilities continue to own and maintain the distribution network and billing.

State revenues normally distributed to utility energy efficiency programs, plus the usual charges per kilowatt-hour, would be redirected to the CCAs, enabling them to buy green energy and alleviate the need for building new peak-capacity plants (typically powered by natural gas). Customers are automatically enrolled in the CCAs unless they opt out.

According to the New York Times, the nation's first test of the concept in Ohio has been an unmitigated success with 126 municipalities participating in 67 CCAs, providing power to about 800,000 customers with only a 5% opt-out rate. The latest supply contract signed by one of the CCAs, the Northeast Ohio Public Energy Council (NOPEC) offers rates 6% lower than the local utility. Thank you, Ohio.

In California, however, it's been a long road for those who have taken it. None have succeeded yet.

San Francisco is very close, with several bids for potential suppliers in hand. It intends to obtain 51% of its electric supply from renewables by 2017 — more than double what the ineffectual state renewable portfolio standard (RPS) mandates.

The Kings River Conservation District in the San Joaquin Valley, the farming area that forms the southern part of California's Central Valley, tried to form a CCA since the law was passed but has essentially given up. It was simply going to cost them too much to fight the opposition of PG&E, the state's largest utility.

With 15 million customers, PG&E has the budget and the lawyers to easily win a pitched battle with a struggling farming community. Instead, Kings River has opted to issue bonds and build its own power plants running on local solar, micro-hydro, and biomass resources.

In Marin County, where I live, the effort to create the Marin Energy Authority (MEA) CCA has been under way for six years. The county and all but three cities within it have so far chosen to join the MEA, which is scheduled to sign a power supply contract with Shell Energy North America on February 4. At that point, the majority of the county's customers would be enrolled in the program — unless they opt out.

PG&E has launched a multi-pronged assault on the MEA, feeding sour analysis and misinformation to a grand jury investigating the proposal; creating negative press; sending out a direct mail assault full of distortions under the auspices of a "Common Sense Coalition," which I stapled to my wall, and sending consultants to represent its views at local government meetings.

With the contract deadline at hand, the battle has intensified as city councils and the county board of supervisors decided whether to remain with the program.

I have followed the MEA since its creation, including brief correspondence with Paul Fenn, who authored the CCA laws, and conversations with local elected officials who support the MEA. Over the last two weeks, I showed up at my city council and county meetings to share my view on why it's imperative for municipalities to take control of their own renewable energy procurement. And I have a meeting scheduled this week with the mayor to explain my reasons in more detail. I consider it my civic duty and a fulfillment of my resolution to work harder on local solutions.

CCAs are a different sort of secession than the State of Jefferson, but the aims are really the same: to let local communities take advantage of their resources when their faith in the state has failed.

Smart grid technologies and rooftop solar need not wait for sweeping support from the federal and state levels. Indeed, given the extraordinary fiduciary stress that federal and state governments are under, I don't believe local communities can afford to wait for it. Local supply is now the name of the game. God bless the child that's got his own.

After years of watching my state government fail to meet its renewable energy targets... of watching my utility monopoly stymie the rapid deployment of renewables... of watching the public utilities commission install a torturous obstacle course of red tape in the path of rooftop solar... I'm willing to carry that rebel flag.