Will the U.S. Choose the Path to Profit, or the Freeway to Failure?

With the Copenhagen summit on climate change less than three months away, and governments the world over engaged in intensive discussions and preparations, it feels like we are finally standing at a true crossroads.

One direction leads to a vision of a sustainable future, with adequate energy, food, and water for all without compromising the welfare of future generations.

The other direction is a continuation of the path we're currently on, which the vast preponderance of empirical evidence says is not sustainable, but which continues to be vigorously defended by vested interests.

Climate change is the headline purpose that brought us to this point, but choosing the sustainable path has far greater implications. As sustainable business proponent and founder of the carpet company Interface, Ray Anderson, put it in the introduction to his new book, Confessions of a Radical Industrialist:

By survive, I mean business must be steered through a transition from an old and dangerously dysfunctional model to a far better one that will operate in balance and harmony with nature—thrive in a carbon-constrained world, and put down the threats of global climate disruption, species extinction, resource depletion, and environmental degradation. In a word, develop a business model that is sustainable.

The sustainability cause is championed by an unlikely alliance of climate scientists, government agencies, military analysts, environmentalists, and forward-thinking business leaders like Anderson — the Greens — all of whom realize that we are heading for Big Trouble if we keep on going the way we have been.

On the other end of the struggle are the Browns: businesses who would rather fight than switch. The oil and gas industry dominates this faction, but they are by no means alone. All those whose livelihoods depend on our continued use of fossil fuels have found common cause in opposing efforts to curb climate change.

In the past several weeks, two utility companies — Duke Energy, which provides power to five states; and Alstom, a French manufacturer of power plant components —and aluminum giant Alcoa resigned their memberships in the American Coalition for Clean Coal Energy after revelations surfaced of forgeries the group perpetrated as part of its lobbying against climate change legislation.

This week, California utility PG&E made a similar move by leaving the U.S. Chamber of Commerce over the organization's extreme stance on climate change. Three weeks ago, the Chamber called for a "Scopes monkey trial of the 21st century" to put climate change science on trial — a silly idea, since science is intrinsically a process of examination and proof; and strange choice of metaphors, considering that science won the Scopes argument.

Then again, it's not called the U.S. Chamber of Sustainability. Would that we had one!

As I discussed two weeks ago in my article "Welcoming China's Energy Revolution, China has made aggressive and well-timed moves in the solar race. In only five years it has gone from being a negligible player to the world's top producer of solar PV cells, according to a new report from the European Commission Joint Research Centre Institute for Energy. Worldwide solar module production increased by 80% in 2008 alone, with Asia and Europe taking the largest share while the U.S. share barely budged. 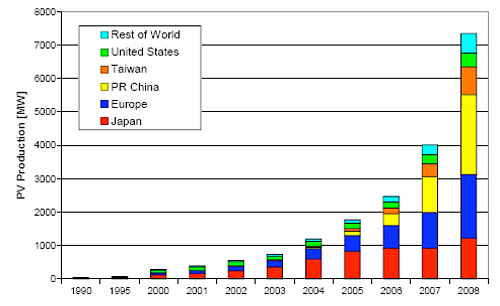 Source: JRC PV Status Report 2009. "In 2008, China became the global leading producer of solar cells with an annual production of about 2.4 GW, followed by Europe with 1.9 GW, Japan with 1.2 GW and Taiwan with 0.8 GW. It this trend continues, China might have about 32% of the world-wide production capacity by 2012."

It must greatly amuse the Chinese to watch the Greens and Browns in the U.S. waste their energy squabbling over who's going to pay for the transition to a sustainable climate, starving the country of investment in the clean energy solutions of the future while China is busy taking over the global PV market and implementing policies that will soon take it far beyond the U.S. in meeting climate change and renewable energy goals.

Indeed, the U.S. is fighting itself at every turn, offering more incentives that will increase CO2 output than those that would curb it.

Last week, just days before President Obama would warn at the United Nations that the "irreversible catastrophe" of climate change must be avoided, the Environmental Law Institute issued a new report finding that U.S. subsidies to fossil fuels ($72 billion) were over two-and-a-half times as great as those it invests in renewables ($29 billion). Of the latter portion, traditional renewables received only $12 billion, while corn ethanol — a net energy loser — got $17 billion.

The OECD also issued a report last week estimating that eliminating fossil fuel subsidies alone would cut emissions by more than 10% by 2050. I suspect the two reports had something to do with Obama's call on Wednesday of this week to "work with my colleagues at the G-20 to phase out fossil fuel subsidies."

As of this time, however, the madness continues. Pending House legislation sports tens of billions of dollars of incentives for so-called "clean coal" technology, which does not exist commercially, but has no hint of a feed-in tariff (FiT) — the primary impetus behind Europe's stunning renewable energy growth.

As I have written previously, FiTs have been responsible for an explosion of renewable energy in over 37 countries and put them on track to meet their carbon emission reduction goals. But instead of following those examples, the U.S. is fixated on a backward approach to the climate problem: a highly corruptible and ineffectual cap-and-trade mechanism that puts the focus on what comes out of the tailpipe instead of what goes into the engine. (Notable exceptions to this are Gainesville, which has adopted a FiT, and San Antonio, Los Angeles, and Sacramento, which are considering one.)

A new research note from Deutsche Bank points out that under Germany's FiT the share of electricity supplied from renewables grew from 6.3% to 14% and created 300,000 new jobs, but the program's cost only contributed between 3% and 4% to the increase in electricity prices from 2004 to 2006.

Over the same time period, the fraction of renewable energy in the U.S. actually fell from 10.1% to 9.4% while the Browns fought it tooth and nail. Job creation was anemic, electricity prices still rose, and oil imports continued to increase.

A Case Study in Failure: California

As usual, California offers a useful example of how backward the U.S. approach is to formulating energy policy.

A recent showdown occurred over a bill that would raise California's renewable portfolio standard (RPS) from 20% by 2010 to 33% by 2020. Governor Schwarzenegger threatened to veto the bill because of a provision that would require the power to be generated by plants connected to the California grid — an attempt to keep the projects in-state and limit imports — calling it "protectionist." Then he proceeded to issue an executive order to the California Air Resources Board establishing the new 33% RPS by mandate.

The RPS approach, which favors utility-scale projects, has already failed to yield the desired results. California's three big utilities will almost certainly fall short of meeting the existing 2010 goal, with laggard San Diego Gas and Electric currently getting only 10% of its electricity from renewables. (I can also tell you firsthand that the one residential solar project I did in SDG&E territory was a slow-moving absolute nightmare of confusion and paperwork compared to the projects I did in PG&E territory.)

At the same time, an approach that actually works continues to meet resistance.

California's net metering law, which requires utilities to give credits to customers who feed renewable power back to the grid, is currently capped at 2.5% of the total load. A new bill would have raised the cap to 5%, but was stalled when the International Brotherhood of Electrical Workers (IEBW) successfully inserted an amendment that would have permitted only contractors with a general C-10 electrician license to install projects larger than 250 kilowatts, excluding numerous non-union contractors with the solar-specific C-46 license. (The IEBW has attempted the same strategy several times in recent years, impeding the progress of pro-solar policy while gaining nothing for itself.) If the net metering cap is not raised, there is a distinct possibility that PG&E will hit the existing cap and trigger another slump in the long boom-and-bust history of solar.

If the U.S. were serious about making progress on climate change and renewable energy, it would put aside the jockeying of narrow-minded interest groups and implement long-term policies with proven records of success.

As I see it, the effective policy approaches are stable, transparent, long-term, and simple:

Above all, we should stop framing our decision-making around short-term cost arguments, and accept the fact that all of the energy solutions of the future will cost more than those of the past. The cost of fossil fuels will continue to rise because the best resources have already gone up in smoke, and what remains is progressively more expensive to produce. The cost of renewables will cost more in the short term, but fall as the technologies mature.

Besides, ample research has shown that in the long run — once the true costs of all fuels are recognized, with nothing externalized, and cost-benefit analyses are extended into multi-decade time frames — renewable energy wins hands-down over fossil fuels.

With which would you rather align yourself: a dirty, mature industry going into decline that still claims to need billions in public support. . . or a clean, new industry that's growing at 40% per year, with no limit in sight, and a reasonable expectation of being able to get along without subsidies in 20 years or so?

Beyond renewable energy's long-term benefits — a more resilient economy, jobs created indirectly, better public health, a reduced burden on the national coffers for imported oil (on the order of $400 billion for this year in the U.S.), and other indirect and intangible benefits — there is the straightforward imperative that we begin the urgent transformation toward true sustainability.

The short-term cost argument is tired, and we have already delayed too long. It is time we evaluated our choices in terms of the wealth and welfare of future generations, not just the personal net worth and power of today's kings of industry.

At this crossroads in history, the United States can either seize the opportunity to reinvent itself and secure a prosperous future, or allow an unproductive process of selfish bickering to lead us further down a dead-end street. We can apply our vaunted ingenuity and innovation to the renewable energy challenge, or watch our fortunes continue to slide while the rest of the world kicks our butts.

We do have a choice.

P.S. As I mentioned. . . The "COP-15" summit is less than three months away. The choices that are made there —with or without the U.S.— will have trillion-dollar consequences. Click here to see how this is already spurring legendary market profits. . . and how you can still position yourself before the crucial December meeting.