Tesla (NASDAQ: TSLA) Has No Competition

Tesla and the Quest for Electric Vehicle Dominance

The dawn of the electric car is here, and it has been ushered in by Tesla (NASDAQ: TSLA).

When the company first went public, all we heard was how quickly it would fail. Five years later, and the stock is still trading 1,200% higher than its debut price of $19 a share

Of course, judging a company’s future profitability shouldn’t rest on the price at which its stock is trading on any given day. After all, just five years ago Alpha Natural Resources was trading for $50 a share. Last month it went belly up. Here’s how that one turned out … 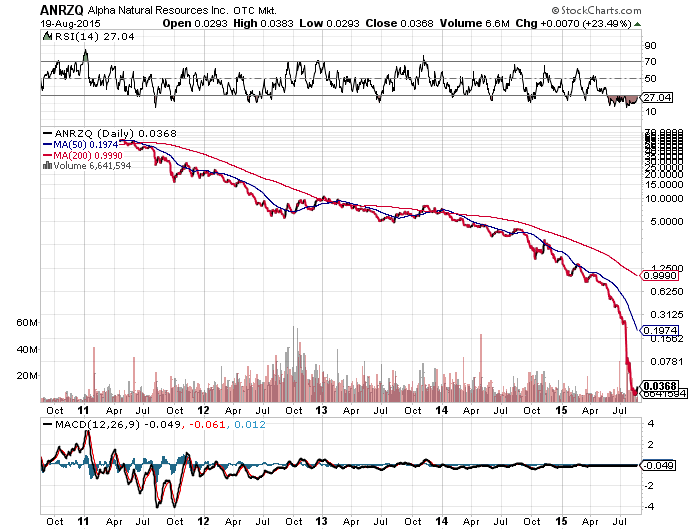 So when looking at Tesla, it makes no sense to predict its future simply by looking at its current share price.

That being said, I do remain quite bullish on Tesla. Not from an investment perspective, necessarily — although betting against Tesla is probably not a good idea — but from the perspective of long-term viability, thanks entirely to the fact that CEO Elon Musk has created and delivered the biggest game-changer the auto industry has ever witnessed.

To see how far Elon Musk has taken this company over the past ten years is truly amazing. And what he has up his sleeve for the future will likely make past goals seem almost trivial.

So when I hear about established car companies coming out of the woodwork to challenge Tesla, I often find myself shaking my head.

Fortunes will be made

As reported in USA Today …

• Audi: Its new, luxury electric-crossover concept is being introduced at the auto show next month in Frankfurt and will compete with Tesla's new Model X, Audi announced Wednesday.

• Aston Martin:The brand best known as the preferred wheels for James Bond said it will start with a luxury electric sedan that will be priced higher than Tesla's only current model, the Model S sedan.

Tesla started at the high end in order to fund future endeavors, such as its soon-to-be-released Model 3, which is set to be the first “competitively-priced” electric car that can deliver at least 200 miles on a single charge.

This is where Tesla’s fortune will be made. At least in the arena of electric cars. That whole battery manufacturing thing Musk is developing is another animal entirely.

I’m not saying Audi and Aston Martin won’t be able to sell their high-end electric cars, but they’re not competing with Tesla. If anything, they’re competing with the illusion of Tesla being a high-end luxury car maker. It’s not. If anything, it’s a technology company that’s not held back by the balls and chains of auto execs that should’ve cashed in their pensions back in the 1990s.

History in the Making

Electric powertrains are part of our future vision. Emission regulations will force everybody to make changes.

Silly rabbit, delusions are for kids!

It’s not emissions regulations that will force everybody to make changes. It’s better vehicles. And by the way, consumers won’t be forced at all. They’ll be running to the showrooms, voluntarily - and enthusiastically.

Ultimately, electric cars will not only be cost-competitive with their internal combustion counterparts, but they’ll also deliver the same driving distances without the environmental and economic burdens of fossil fuels.

Truth is, unless you live in a geographically-challenging region, it won’t even make sense to buy anything but electric. And that goes for everyone - not just luxury car buyers.

Understand, I don’t write these words today to discredit Audi and Astin Martin as quality car makers. Both build very impressive machines, and both will have no trouble selling their new electric offerings - as long as they meet the standards of their customer base.

However, I do take issue with yet one more article that finds it necessary to continue to portray electric cars as little more than cars for the rich. Sure, it’s mostly well-off folks that are buying Teslas these days, but that won’t always be the case.

Whether the naysayers want to admit it or not, Tesla will go down in history as one of the most important and influential companies of the 21st century. And it won’t be because it was able to sell 100,000 units of a car called the Model S.

To think otherwise would be, for lack of a better word, naive.