Panasonic announced yesterday that it will broaden its ties with Tesla, buying a 2 percent share in the company at a cost of $30 million. Though the deal isn't earth-shattering in size, it has drawn new attention to an emerging green car alliance between two of the world's largest corporations and a young EV startup that has sold just 1,300 vehicles in its seven-year history. 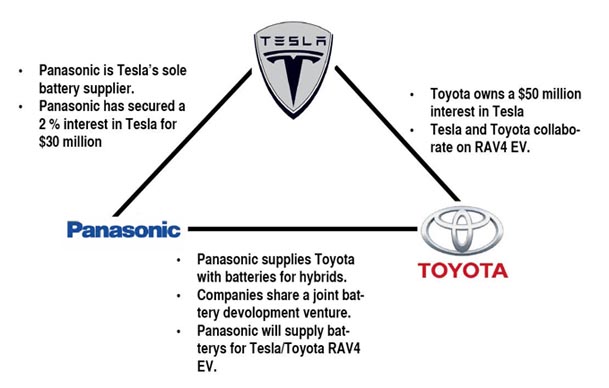 Panasonic has been openly eager to extend its lead with advanced vehicle batteries for some time now. It already supplies NiMH battery packs for Toyota hybrids, including the venerable Toyota Prius, and will make the lithium ion batteries for the Prius Plug-in when it comes out next year.

Last year, the company bought out Sanyo in a move that was said to be largely motivated by Panasonic's desire to acquire it's competitor's electric vehicle battery development and production capabilities. (Sanyo has existing battery deals with Honda and Ford for hybrids, and Volkswagen, Audi and Suzuki for EVs.)

By 2015, the company hopes to control a 40 percent share of the world's total lithium ion battery market (including consumer electronics applications,) which some analysts think could grow by as much as 125 percent annually over the next 6 years.

Whether or not a significant portion Panasonic's long-term EV profits will come from selling batteries to Tesla remains to be seen. But in solidifying that relationship, the electronics giant has boosted its standing in the advanced technology vehicles market. The move also serves to strengthen Panasonic's ties with Toyota—making it all the more likely that once the world's largest automaker finally does make its big move into EVs, Panasonic's name will be on the batteries.

** Zach McDonald is a writer from New York City. He has been covering alternative fuel vehicles, politics and energy policy for HybridCars.com since moving to Oakland four years ago. His first car was a late '80s Chevy Caprice Classic and he looks forward to his next being a plug-in—preferably with a working radio.