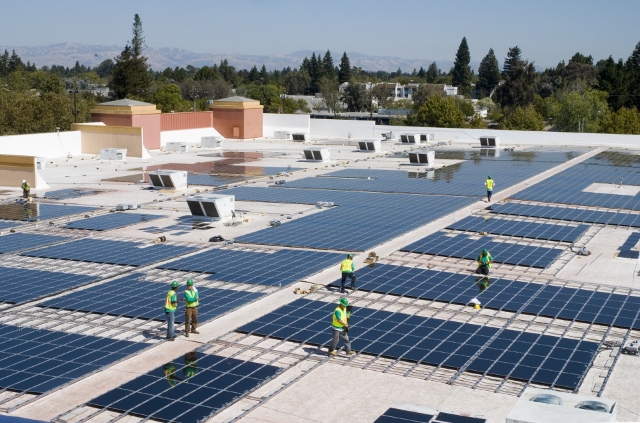 We got word this morning that SolarCity (NASDAQ:SCTY) has signed a deal to acquire Silevo, a solar panel technology and manufacturing company.

With Silevo now in the fold, SolarCity is in discussions with the state of New York to build a new manufacturing plant with a targeted capacity in excess of one gigawatt – within two years. Upon completion, this will be one of the largest solar panel production plants in the world.

Although there are plenty of manufacturers in the marketplace today, this exclusive deal gives SolarCity access to a wealth of standardized product at a very attractive cost.

Here's what SolarCity reps had to say. . .

Given that there is excess supplier capacity today, this may seem counter-intuitive to some who follow the solar industry. What we are trying to address is not the lay of the land today, where there are indeed too many suppliers, most of whom are producing relatively low photonic efficiency solar cells at uncompelling costs, but how we see the future developing. Without decisive action to lay the groundwork today, the massive volume of affordable, high efficiency panels needed for unsubsidized solar power to outcompete fossil fuel grid power simply will not be there when it is needed.

SolarCity was founded to accelerate mass adoption of sustainable energy. The sun, that highly convenient and free fusion reactor in the sky, radiates more energy to the Earth in a few hours than the entire human population consumes from all sources in a year. This means that solar panels, paired with batteries to enable power at night, can produce several orders of magnitude more electricity than is consumed by the entirety of human civilization.

Even if the solar industry were only to generate 40 percent of the world’s electricity with photovoltaics by 2040, that would mean installing more than 400 GW of solar capacity per year for the next 25 years. We absolutely believe that solar power can and will become the world’s predominant source of energy within our lifetimes, but there are obviously a lot of panels that have to be manufactured and installed in order for that to happen. The plans we are announcing today, while substantial compared to current industry, are small in that context.

Clearly, the market was pleased with SolarCity's announcement. The stock soared more than six percent in morning trading. Of course, the stock is also down considerably from its March, 2014 high of more than $77.

I actually commented on this about a month ago, noting that it was time to buy shares. I remain bullish on SolarCity and continue to stand by my one-year price target of $85.