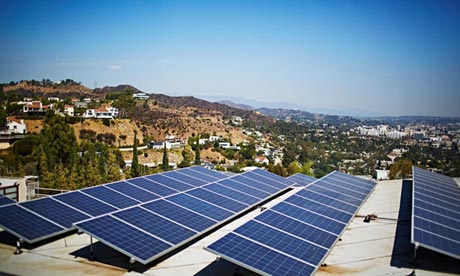 Last week, we took a look at the oldest socially responsible (SRI) mutual fund in the United States, Pax World, which was founded by a couple of protestant ministers who wanted a new mutual fund that did not support Vietnam war profiteers.

That fund has evolved a lot since its foundation in the early 70's, and branched out from anti-war investing to include other social causes such as environmentalism and worker's rights. It now has 18 different funds that each cater to these different areas of investment.

This week, we're going to look at the first SRI mutual fund that was founded specifically to invest in clean energy solutions.

It's currently known as the New Alternatives Fund (NALFX), but it started back in 1978 as The Solar Fund Inc.

You can probably guess what their original investment target was.

Maurice and David Schoenwald changed the name of the fund in 1982 and sunk $100,000 into solar cells, insulation, geothermal, wind, recycling, and non-nuclear energy companies.

Through the 80's, you could find ads for NALFX running in the back of Mother Jones Magazine, making bold and sometimes bewildering proclamations to attract socially conscious investors.

The ad shown below ran in a 1986 issue of the Vegetarian Times, speaking directly to the socially conscious capitalist. 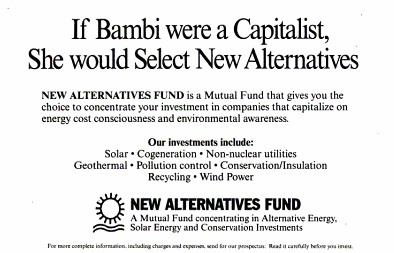 It's pretty safe to say this ad didn't exactly age well.  However, it's targeting the same audience as the company does today...

I'm not talking about vegetarians.  I'm talking about people who understand that renewable energy and a clean planet can make money just as easily as fossil fuels and pollutants.

The fund invests in most of the same things it did back then, but has broadened to include: hydroelectricity, fuel cells, hydrogen power, biomass, and ocean energy. It also dabbles in natural foods, clean water, clean air, and natural gas, but the majority of its holdings are in renewable energy.

The nice thing about the fund is that it doesn't bother at all with the notion of negative screens.  It has positive screens and exclusions.  In other words, it never invests in oil, coal, nuclear power, weapons companies, tobacco, or companies with discriminatory policies, unfair labor practices, or animal testing procedures, and their will be no exceptions.

It also limits its focus to such a degree that it is susceptible to unfavorable market conditions.

At several points in its 32-year run, it's had some dry spells.

However, it's regained some lost traction in the last year, even though its strict guidelines force the company to liquidate decent assets from time to time.

In May 2011, for example, co-founder David Schoenwald said the fund would have to drop French wind power and ocean-energy provider EDF Energies Nouvelles SA, and solar cell manufacturer SunPower Corp. (NASDAQ: SPWR)  when they faced acquisition by bigger energy companies that deal with fossil fuels.  The former was eventually sold off, but the latter remained a safe investment for New Alternatives.

The real result is that New Alternatives is actually quite nimble, despite its design for long positions.  With unmoving screens, the movement of the market at large still forces portfolio reevaluation.

What's more, the fund is working toward a fully web-based management model.  In its fourth quarter report, the company said investors will soon be able to open an account, buy and sell shares, change addresses, receive statements and monitor balances through its web portal.

Morningstar classifies NALFX as a fund with higher than average risk with slightly lower than average returns.  Its five-year average return is under five percent, and this year it's a little higher than six.  But with a low minimum position of $2500, it carries an outsized degree of confidence that the fund won't deviate from its stated goal of environmentally conscious investing.