MARSEILLE, FRANCE: As beautiful as the South of France is, landscapes alone don't make the future look promising. The economies of Portugal, Spain, and southern France are feeling the pinch of the global recession more than many developed countries.

Yet all across southern Europe, from the westernmost spot in Portugal at Sintra (which is also the farthest-flung spot on the Continent) to the remarkable blue French Mediterranean coast, renewable energy is right on the horizon.

Below you see the Moorish fortress at Sintra, where the Atlantic seems to tell you there just has to be something beyond the sea. While I took in this view, it immediately made sense to me why the small Portuguese nation had such a great appetite for exploration in times past and in the present, too. 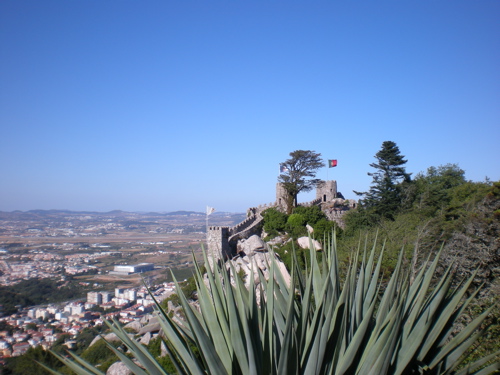 And, as reported in this article on Portuguese renewable energy, Energias de Portugal (LISBON: EDP) and Spain's Iberdrola (MCE: IBE) both launching new renewable energy divisions point towards a reinvigorated desire to move to new frontiers.

(If you look closely in the photo below, you can see wind energy turbines churning just before the continent's end at Roca...) 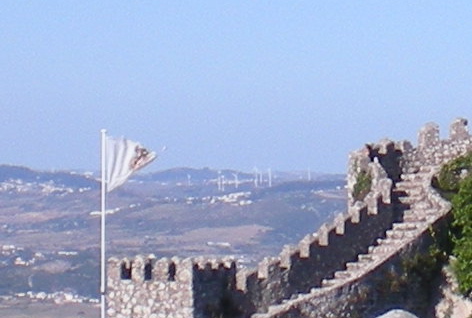 But the discussions I've had in Lisbon, Madrid, and Marseilles direct my attention to new local reasons for the rise of renewables.

It's got a lot to do with unemployment and the quality of life here in southern France... home to ports that date back to Roman times and more recent factory-based industries that leave kids asthmatic and groundwater poisoned.

Add to that the large numbers of immigrants from North Africa and former French colonies around the world who come to France (continuing a theme seen in Portugal and Spain), and there are major social challenges that locals have to confront.

Marseilles is a multi-ethnic, working-class city known as the "melting pot of France," where smells of couscous and kosher meats blend with baguettes and West African delicacies, and on a clear day some say you can see all the way across the Mediterranean.

But local flavors are one thing, and money is quite another.

Median income in Portugal dropped by 2.6% in the latest numbers released by the Organization of Economic Cooperation and Development, the last in the "rich countries' club." Spain's not much better off, with a drop of .7%, and though France logged a .9% rise, that barely treads water against price inflation and doesn't account for disparate regional economies like Marseille's.

There are also cuts in benefits coming under the center-right President Nicolas Sarkozy, which means getting back to work is a must, no matter what the pay...

And renewable energy installations that are subsidized by the government would be a shot in the arm to energy demands and employment shortfalls at the same time.

So we're looking at Areva, a French nuclear energy provider that is now going in the same direction as our Spanish and Portuguese favorites EDP and Iberdrola. Areva's wind energy division taps the company's considerable coffers and grid connection capabilities to take French renewables to the next level.

There's also EDF/Gaz de France, the national utility which has been at the center of a years-long European controversy that asks the question: Just how free should cross-border energy cooperation be?

Some consider EDF, Italian energy companies like Enel, and even the Iberian powerhouses I've mentioned before, to be "national champions," and therefore companies that should stay in the hands of native executives and operate only at home.

But today's energy economy demands solutions, and so do the people. Workers are increasingly mobile, not just as migrants taking ferries back and forth from here to Algeria, but also people like me who can work from anywhere with the help of the internet.

Nicolas Sarkozy is promoting the idea of a Mediterranean Union that would include North African and Middle Eastern countries, and the Trans-Mediterranean Renewable Energy Cooperation coalition is already hard at work promoting knowledge-sharing and grid connections across the region.

Power, ideas, and progress don't know any bounds these days.

Often, politicians take a while to catch up...

Actually we'd say that's almost always the case. Remember just a few months ago when corn ethanol was the hot topic on Capitol Hill? We steered you away from it, and now a justified backlash has Americans turning to better solutions.

And it looks like we're ahead of the curve in European renewable energy too, at least from the standpoint of most American investors.

The Economist magazine recently published the results of a study that found half of the world's high net-worth individuals invest in green investments for high return potential.

In the United States, only about 5% of those who have over a million in non-real estate assets are greening their portfolios, and among that number most said their motivation was environmental.

It's an astounding statistic but one that we think exemplifies why our Green Chip International service is extremely important to people who really want to make money in a burgeoning industry the rest of the world's wealthy have already woken up to.

I'll fill you in next week with more on Europe's renewable energy progress and the companies that are tapping surging worldwide investment in clean energy opportunities.

In the meantime, take a look at Green Chip International and see why it makes sense to go green globally.