GM's Future: See It With Your Own Eyes

I'll be the first to admit it.

Over the past few years especially, I've had little sympathy for some of the major auto-makers that have been losing loads of cash. The way we see it, they brought it on themselves by trying to force the market, instead of supplying it properly.

Back in 1997 GM had an opportunity to lead the world in fuel efficiency with their electric vehicle, the EV1.

The EV1 was an electric car (with an 80-mile range) that GM introduced before the California Air Resource Board's (CARB) original Zero Emission Vehicle (ZEV) mandate went into effect.

The mandate required 2% of all new cars sold by the seven major auto-makers in California to meet "zero emission" standards by 1998, and 10% by 2003.

But GM, along with nearly every other major auto-maker, played both sides of the coin. While the EV1 was selling, and Toyota, Nissan and Honda were developing prototypes, the big auto-makers also aggressively tried to kill the ZEV mandate.

The lawyers got paid, the chairman of CARB got a cushy new job with the fuel cell institute (after manipulating the hearings on the ZEV to cater to the auto-makers while silencing ZEV advocates), and the EV1 was forced into extinction.

In 2006, this tragic story came to life in the documentary, "Who Killed The Electric Car?" And those who saw the movie called bullsh%$ on the world's biggest auto-maker.

The Toyota Prius is one of the most popular vehicles on the road. Its exceptional fuel efficiency has helped the company sell more than 1 million units. And as gas prices continue to rise, so does the demand for fuel efficiency.

Every major auto-maker is now offering hybrid versions of their vehicles. And most industry insiders agree that over the next decade, nearly every vehicle on the road will be some version of a hybrid. That includes GM.

In fact, GM, despite years of mediocrity, complacency and bad ideas, may actually have a shot at jumping to the head of the line when it comes to fuel efficiency.

Plug-In Hybrid Electric Vehicles: They Finally Get It!

It's hard for a cynic like me to believe, but it's starting to look like GM may actually be the next major auto-maker to raise the bar in fuel efficiency.

Not counting the insanely efficient vehicles that some smaller companies and garage engineers have already built, of course.

The bottom line is that these guys have no choice.

The oil supply crunch is becoming more and more apparent every day. Gas prices are only going up from here, and consumers are freaking out.

But while some will continue to demand that the government step in and "fix" this problem - which you and I both know is not an option - it will have to be an increase in fuel efficiency to keep our personal transportation moving.

And GM knows this. They finally get it. They've finally decided to stop dictating consumer behavior, and start embracing it.

They're doing it with the Chevy Volt.

The Volt is a Plug-In Hybrid Electric Vehicle (PHEV) that can deliver 40 miles in all-electric mode.

To give you a frame of reference, the Bureau of Transportation Statistics has indicated that U.S. commuters drive an average of 29 miles per day. For those who fall into this category, driving to work won't cost a single penny in gasoline costs. And if you go beyond the 40-mile range, the Volt's gas-powered engine kicks in, both propelling the vehicle and feeding an onboard generator that produces electricity while the car is operating.

Last week I attended the Alternative Fuels and Vehicles Conference in Las Vegas, where I had the opportunity to speak with a couple GM reps, and also see the Volt.

For a plug-in hybrid electric vehicle, this sure as hell isn't some tinker toy car.

Take a look at these pictures: 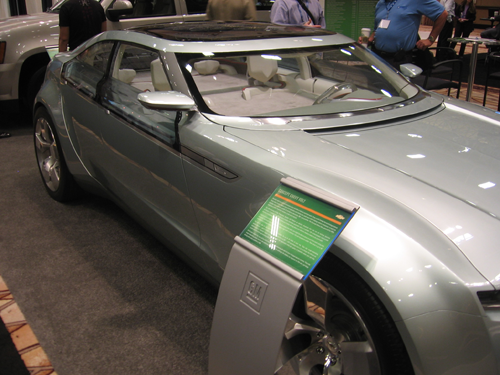 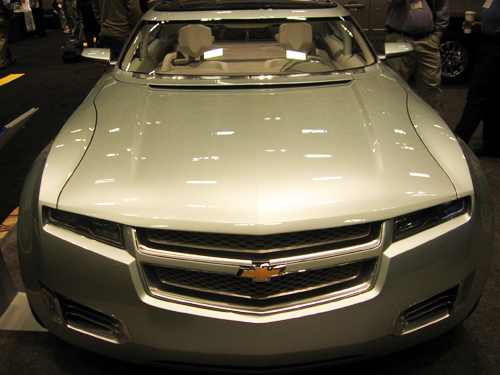 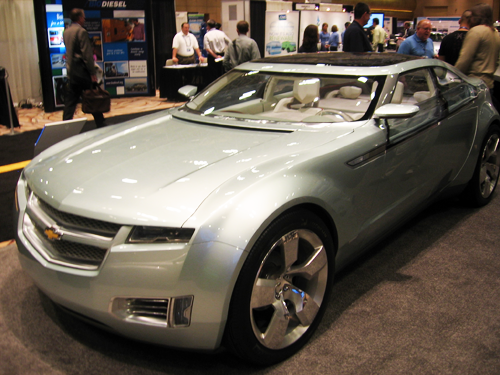 It is our hope that GM will be successful with the Volt. It's a big game changer, and finally gives GM some much needed credibility with consumers seeking fuel efficiency.

Don't get me wrong. If they balk or continue to press Congress on inadequate fuel efficiency measures, I won't hesitate to call them out. We have to.

But I have to be honest. There was definitely a different attitude at this year's conference. There were no excuses about past decisions. In fact, there was much acknowledgement of GM's less-than-stellar past performance in the area of fuel efficiency.

And we're eagerly awaiting 2011—when the vehicle should finally hit the market.

In the meantime, we remain bullish on the high-performance battery companies that continue to pick up momentum as GM and other major auto-makers begin to embrace PHEVs - the absolute best near-term solution to our oil crisis.

These batteries represent the next generation of fuel for personal transportation. They will enable a significant decrease in oil consumption, carbon emissions and infrastructure vulnerability.

The transitional energy economy is upon is, my friends.