Why Oil Prices May Never Rise Above $150

One of the most bedeviling problems for oil producers (and oil investors) is knowing when it's too cheap to keep producing, and when it's too expensive to sell.

Last year gave us new boundaries: $147 a barrel was too expensive, and $33 was too cheap. But those aren't terribly useful numbers in the real world.

We now know that $147 was extra-inflated by too much money sloshing into the sector, and $33 was extra-deflated by the fear and confusion that dominated all markets in December of last year. It's likely that tighter regulation of the oil futures market will tamp down the former, and the latter will not be seen again. . . so long as the world banking system continues to beg, borrow, and steal its way to stability and "full faith and credit."

If you're a Chevron trying to decide if you should plunk down another $5 billion for a big new deepwater platform, or a marginal producer of oil from unconventional sources where the production cost is high, you'll find it hard to commit to new projects with price volatility like that.

One way to get a handle on the question is to look at the supply side costs. As I wrote in March, the current cost of new production in the few places in the world where oil production can still be increased ranges from $60-$75 a barrel, and the average minimum is around $65. The more extreme and marginal projects we'll be eyeing in ten years' time will need closer to $100 a barrel to pay off.

But prices on the demand side of the equation are harder to gauge.

Several presenters at the Association for the Study of Peak Oil (ASPO) conference two weeks ago used measures of GDP to express the economy's tolerance limit for high oil prices.

David Murphy, a pioneer in net energy (EROI) research at SUNY, noted that major recessions are always associated with petroleum and offered this chart, suggesting that that oil expenditures over 5.5% of GDP lead to major recessions: 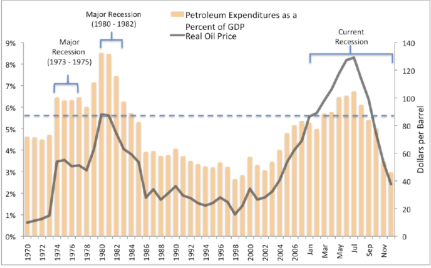 Murphy changed the time scale from years to months at the end of the chart to demonstrate how the portion of GDP paying for oil last year spiked and crashed as much in 12 months as it did in 4-5 years during the most recent recessions.

Steven Kopits, Managing Director of Douglas-Westwood LLC, came to similar conclusions in his presentation. He noted how oil stopped responding to price signals in 2004, with production remaining basically flat even as prices tripled. The global oil supply only expanded by 2% while global GDP grew 17%, causing prices to increase by about 25% per year from 2003 on.

By 2008, when crude expenditures reached 4% of GDP, the U.S. fell into recession. In fact, said Kopits, oil over $80 would have been enough on its own to cause what he called "our first peak oil recession."

Former head of exploration and production for Saudi Aramco Sadad al-Husseini opined similarly in his interview with ASPO, saying that the spending ceiling is between 5% and 6% of global GPD. Accordingly, he thinks alternatives to petroleum like Arctic oil, coal- and gas-to-liquids, and so on may not be economical to develop because their costs are too high.

In essence, OECD countries are simply getting squeezed out of the market as the global drivers of demand shift to the developing world. When the cost of filling the tank on an SUV goes from $60 to $100, it really takes a bite out of consumption in America. But your average resident of, say, India or the Philippines can shrug off a 50-cent increase in the cost of filling the tank on his scooter, because he gets so much more economic value from the transportation.

Kopits believes that $70 oil is enough to effectively lock out the EU from the oil market, and $75 locks out the U.S. This begins to explain how, as independent oil producer Jeffrey Brown observed in his presentation, the U.S. was outbid by Kenya for oil last year.

On a related note, ASPO analyst Dave Cohen made a convincing argument that economic fundamentals will not support increased oil demand — even from China — for years to come, ensuring that global GDP growth remains weak.

In counterpoint, Matthew Simmons asserted that we don't yet know the economy's tolerance point, and thought it could be as high as $500-$700 a barrel.

This is where I must make my departure from Simmons' camp. The data presented on GDP and price at the conference have forced me to reconsider my longstanding belief that peak oil will bring much higher prices. Although prices 5 to 10 years from now, when we're well past the peak and into decline, remain an open question. . . I now doubt that we'll see oil over $150 anytime soon.

If these analyses are correct, then we are on what Kopits called "a narrow ledge": Houston needs $75 oil to keep drilling, but the economy goes into recession with oil at $80.

Two editors of "The Oil Drum" generally concurred. Nate Hagens put the boundaries a bit wider at $60 to keep drilling and $80-$100 as the economic pain tolerance point, and Gail Tverberg observed that oil at $75-$80 seems to kick off a recession.

If the stability of oil production relies on oil spending staying within roughly 4% and 5% of GDP, it's going to be dicey. But if the oil price ledge is only $5 wide, then it's not clear to me whether the global GDP can manage to stay on it.

In short, the world may not be able to continue executing the expensive oil projects of the future at all. The tension between the price of new production and the pain tolerance of the global economy may be resolved not by stable prices, but by a failure to bring new supply online.

This is indeed a crisis — but it's also a hint that it's time to focus on how we're going to replace oil.

Take it from Sadad al-Husseini: "The hidden opportunity may be efficiency and conservation."

The investment community has already heard that message. At the ASPO conference this year, I estimate that not one of the roughly 400 attendees represented development capital, while at a typical Cleantech Forum in San Francisco, at least half of the 1,500 or so attendees are with banks, VCs, and big hedge funds. Granted, the ASPO conferences are about information, not deal-making. . . Still, investors seem to prefer theses based on abundance to those based on scarcity.

It only makes sense. If you had a large chunk of capital to deploy in the energy space, would you rather try to balance on a narrow ledge, or jump into a sector that's growing at 30% per year — with no ceiling in sight — and the wind of oil depletion at its back?

Efficiency and conservation may not be as sexy as solar and wind, but for the next several decades they will be the only real way to survive a future of volatile oil and gas prices and declining supply. It takes a long time to rebuild an infrastructure. . . and in the meantime, we're going to have to make do with what we've got.

In the pursuit of investment capital, cleantech clearly has the edge over oil now.

P.S. Chris continues this article as Part 2 of a series of reports from the 2009 ASPO Peak Oil Conference. See also Part 1.

P.P.S. It's no surprise that the bulk of new efficiency dollars is going to the smart grid. Indeed, CEOs of both GE and Cisco have each said its development will rival the Internet in size, scope. . . and profit. As economic pressures weigh on the development of new oil. . . there's no limit to how high conservation stocks could climb. In fact, this report has all the details on three that could easily double.