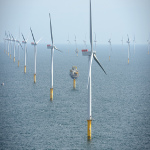 Those who continue to rail against the integration of offshore wind are not going to like this. . .

According to new study out of Stanford University, offshore wind farms can tame hurricanes.

This, as opposed to the scare tactic that hurricanes will destroy offshore wind turbines, snapping them like twigs.

Of course, offshore wind turbines don't exist as a measure to tame hurricanes. That's now just another benefit of a technology that's helping the world usher in a new generation of clean energy integration.

According to Stanford News, Dr. Mark Jacobson has been developing a complex computer model to study air pollution, energy, weather and climate. But a recent application of the model has been to simulate the development of hurricanes.

In light of these recent model studies and in the aftermath of hurricanes Sandy and Katrina, he said, it was natural to wonder: What would happen if a hurricane encountered a large array of offshore wind turbines? Would the energy extraction due to the storm spinning the turbines' blades slow the winds and diminish the hurricane, or would the hurricane destroy the turbines?

So he went about developing the model further and simulating what might happen if a hurricane encountered an enormous wind farm stretching many miles offshore and along the coast. Amazingly, he found that the wind turbines could disrupt a hurricane enough to reduce peak wind speeds by up to 92 mph and decrease storm surge by up to 79 percent.

Dr. Jacobson explained that researchers found that with wind turbines in place, they can slow the outer rotation winds of a hurricane.

"This feeds back to decrease wave height, which reduces movement of air toward the center of the hurricane, increasing the central pressure, which in turn slows the winds of the entire hurricane and dissipates it faster."

Here's a computer simulation that Dr. Jacobson put together.

If you're looking for a way to play offshore wind, there really are no pure plays. However, Siemens (NYSE:SI) is my pick as the leader in offshore wind turbine manufacturing.