It may not be as shiny as solar or as obvious as wind, but no matter how you slice it - geothermal energy is a powerhouse when it comes to renewable energy generation.

As we highlighted in our book, Investing in Renewable Energy: Making Money on Green Chip Stocks...geothermal actually holds significant advantages over other forms of renewable and fossil fuel-based energy.

That works out to a compounded annual growth rate of 9.5%.

To add more fuel to this geothermal fire, it has become quite obvious that the Obama administration is aggressively pursuing increased geothermal development.

For starters, the recent stimulus set aside $400 million for geothermal. Congress also coughed up $45 million for the DOE's geothermal program, and in March, the DOE announced $84 million worth of funding for enhanced geothermal systems.

And just last week, the President announced another $350 million in Recovery Act funding for geothermal projects!

Here's the breakdown on that one...

According to Karl Gawell, executive director of the Geothermal Energy Association, this is more funding now than in the past 20 years.

One company that's certainly going to benefit from all of this is Ormat Technologies (NYSE:ORA).

Now we've been preaching this stock for years. In fact, we first recommended Ormat in January, 2005, when it was trading around $16 a share. And we've been following it ever since.

"Ormat Technologies is one of the biggest geothermal players in the market. Vertically-integrated, the company designs, owns and operates a number of geothermal power plants and recovered energy systems across the globe.

Here's how the stock has performed since the start of the year... 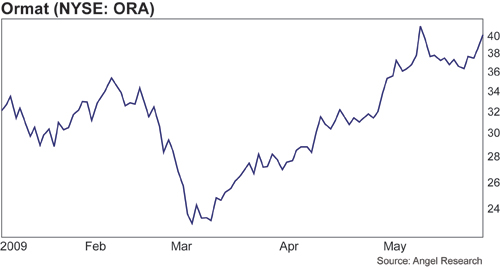 And Ormat isn't the only geothermal stock paying off for Green Chip investors either.

A few weeks ago I told you about a little $0.85 geothermal stock that was significantly undervalued. 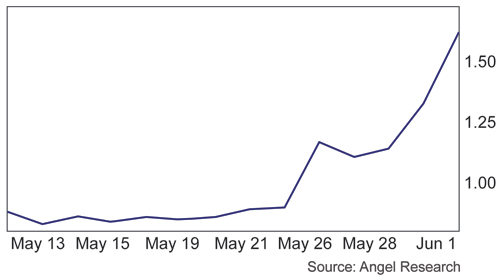 But we're expecting much more. And here's why...

Turns out, the DOE is now expected to pony up $84 million for this company to build its next power plant. Certainly that has helped push the stock up, but there's another piece of news that's right around the corner - and it'll push this thing up even higher.

You see, now that the company can build its next power plant - on the DOE's dime - the only major hurdle for the company is securing a power purchase agreement.

Now if you know anything about the energy business, you know that a long-term power purchase agreement is what seals the deal for investors. It's the final piece of the puzzle that guarantees decades-long revenue streams.

And it's what every trend-chaser on Wall Street waits for.

Just look what happened the last time this company announced a power purchase agreement, back in 2007... 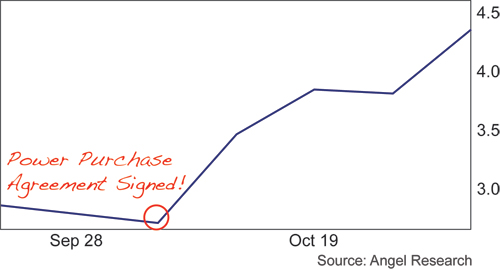 What a lot of folks don't know is that this company is in advanced negotiations for a long-term power purchase agreement - right now.

Once that agreement is signed, and the press release goes out - the stock is going to explode. Just like it did the last time.

To a new way of life, my friend...and a new generation of wealth,