Funny how time flies. It's been about three months since I got my LEAF, a very sophisticated electric car that continues to amaze me every day.

Since I live less than two miles from the EV store, my commute is pretty easy. I can go round trip on less energy than it takes to power a 100W light bulb for ten hours. That's cool! The ride is solid, quiet and smooth as glass, at least on roads with good pavement.

Probably 60% of my driving is giving test drives. Some are walk ups, some schedule ahead of time, but all of them, 100%, want to buy this car. I even had a guy offer me $70,000 for my LEAF, double what I paid for it not a month earlier.

One especially excited customer wanted to know if the LEAF would drive from Santa Monica to Disneyland and return with 10 miles of range remaining. I said sure! My RAV could do that, so I figured the LEAF, with 3 fewer kWh capacity in the pack, could as well. So, we drove to the front gate of Disneyland, stopped across the street for lunch, then drove back to the dealer, a total of 87 miles, and had 13 miles remaining. It was virtually all freeway driving, and we even used the AC some. I kept the speed between 55-60. Looks like under those conditions, the range is 100 miles.

Driving in heavy traffic, and using hypermiling techniques, I can get up to 120 miles, but you have to drive gently in eco mode to get that. Eco mode reduces the energy in the accelerator requiring you to push the pedal further to get the same amount of energy. It's a rather simple, but ingenious method that enables you to drive efficiently. I wish all cars, gas and electric, incorporated it. We'd save a lot of oil if they did.

The number of delivered LEAFs is still small, maybe about 500 total in the U.S., and about 3,000 in Japan. Last week, and today, I delivered two that bear a mention.

Doug Korthof and Lisa Rosen, two of the EV community's most earnest enthusiasts, picked up their red LEAF today. Doug is best known for his righteous and vigorous condemnation of GM for crushing the EV1.  To this day, Bob Lutz dreads the thought of receiving another of Doug's emails. 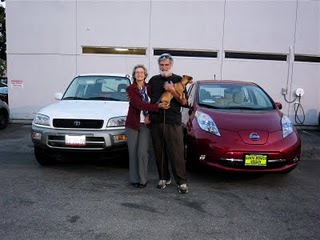 The other delivery, yet another red LEAF, went to our man, Chris Paine, director of "Who Killed the Electric Car?". The car arrived just in time for the premiere of his new film, "Revenge of the Electric Car". On Friday, Chris will join Elon Musk, CEO of Tesla Motors (not to mention Space X and SolarCity), and Carlos Ghosn, CEO of Nissan in NY at the Tribeca Film Festival for the exciting debut of this eagerly awaited follow up to Who Killed. 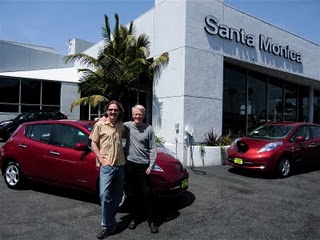 Chris now has quite the stable of green cars: a Tesla Roadster, LEAF, Volt, RAV EV and his gas hog Prius. Once he sells the RAV and Prius, he'll have the only garage anywhere with an example of all three of the cars featured in his new film. Now that's cool!

Since both Doug and Chris have solar on their houses, there are two more LEAFs driving on southern California's most abundant resource - sunlight. EV/PV strikes another blow against the oil and coal companies!

BTW, Chris and I are selling our respective RAVs, so if you're interested, give me a shout.