Monsanto has created a monster, and is now begging competitors to help them kill it...

Their flagship herbicide Roundup has been the world's best seller since 1980. In fact the very weeds the herbicide was created to control and kill have developed resistance to it — thus creating "superweeds".

Some estimates say 7 to 10 million acres of soil in the United States have been affected by these superweeds. 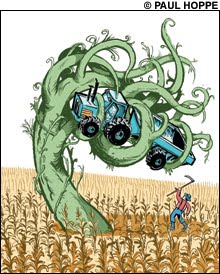 So, with clear evidence that overuse of pesticides has created these strong, mutant plants, what does Monsanto suggest?

A measured reduction in herbicide use? A serious look into organic farming?

They're hoping to entice farmers into using more herbicide, and they're shelling out big bucks to do so.

The company has found themselves in the strange position of paying farmers to use competitor's products...

In order to diversify herbicide use and make Roundup effective once again, Monsanto has announced “herbicide rebates” for soybean and cotton growers.

The “Roundup Ready Plus” program provides weed management recommendations for Roundup Ready crops by pairing products from Monsanto with those of competing companies like Valent and Syngenta.

Farmers who participate in the Roundup Ready Plus program can net up to $20 an acre, depending on the crop.

So let me get this straight...

Overuse of herbicides caused this dilemma. The solution now is to just keep dumping more and more chemicals on the crops and hope for the best?

What do you think?