Joe Rogan Says He’s Voting for Bernie, and the Intolerant Left is Melting Down

I was particularly blown away about how much I learned about the state of anti-semitism in the west. This was the main topic of discussion and I’m certain that those who religiously listen to Rogan’s podcast also learned far more about anti-semitism on his show than anywhere else in modern media.

Also discussed during this podcast was Rogan’s potential choice for the primaries.

Turns out, Rogan is leaning towards Bernie Sanders. And while this conversation was merely a blip within the confines of the nearly 3-hour podcast, it was the one thing that seemed get the most attention on social media.

Apparently, there are a lot of folks on the left who have decided that Rogan is not an appropriate endorser for Bernie Sanders. 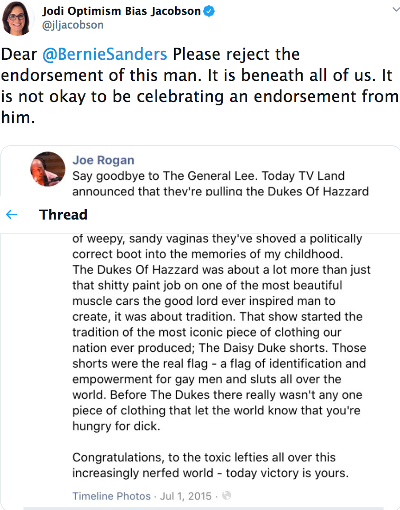 You don’t have to agree with everything Rogan says.

In fact, there have been plenty of times when I’ve listened to his podcast and disagreed with his take on certain issues or his guests’ takes on certain issues. That being said, if you’re familiar with Rogan’s podcast, it’s not particularly structured. Basically, it’s just two people having a conversation. And there’s something very special about that.

There’s no perfectly-planned outline where certain bullet points must be hit within a certain amount of time.

These days, it seems everything in the media is so manufactured. Rogan’s podcast is actually a breath of fresh air. Certainly that’s one of the reasons I listen to it. I also listen to it because sometimes I get to hear opposing viewpoints without hostility and vitriol. Again, it’s just a conversation. And if you’re a rational person, with an open mind, you can actually learn something. Perhaps you can even find some common ground with folks that you might otherwise think are your enemies.

We actually need more of this in our society. Not less.

While I fault no one for wanting to speak out against what they deem as offensive, I also find no value in name-calling.

There are an awful lot of folks on Twitter, right now, calling Rogan a bigot or “alt-right.” If those people ever actually listened to the podcast, they’d know how absurd it is to say such things.

Truth is, Rogan has been very outspoken about a lot of issues the left supposedly cares about: ending regime change wars, advocating for the working class, protecting the environment, free speech.

Now I’m not particularly interested in voting for Bernie Sanders, but it seems to me that those who are would welcome Rogan’s support of the candidate. Yet many are putting irrational tribalism ahead of actually accomplishing their goal of getting Bernie elected. That is, for lack of a better word, stupid.

In any event, I would encourage anyone who’s never listened to Joe Rogan’s podcast to listen to the one he just did with Bari Weiss. The one where he said he’d vote for Bernie. The one that so may folks are criticizing. Listen to that podcast. Listen to the discussion. Listen to the polite conversation. Listen to points and counterpoints. If you go into it with an open mind, I’m certain you’ll walk away realizing that Joe Rogan is anything but "alt-right" or a bigot.