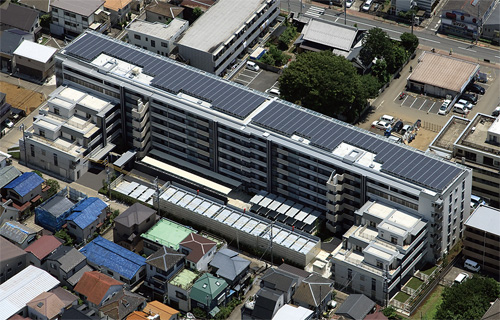 It’ll be a year on March 11th since the devastating earthquake and subsequent tsunami occurred in Japan.

The result was billions of dollars in damage to major prefectures and a catastrophic meltdown at the Fukushima Dai-ichi nuclear power plant. A smörgasbord of harmful materials with half-lives in the millions of years have been detected in the areas surrounding the power plant. So it's no surprise that so many Japanese are now strongly supporting the integration of alternative energy sources. Particularly solar.

Of course, this demand not only stems from a reaction to the dangers of nuclear power, but also due to the fact that when Fukushima Dai-ichi was initially offline, Japan suffered a severe lack of power.

Each of the apartments sold for between $350,000 and $470,000. Because of the overwhelming response to the apartment, other developers have since jumped on the solar apartment bandwagon and are experiencing similar success. In addition, homeowners that were initially skeptical about how much money they would save on their electricity bills have been pleasantly surprised after cutting their electric bills in half.

Now it should be noted that these apartment buildings cannot be more than six stories at the present time. In order to give each apartment its share of the solar energy, there needs to be a corresponding amount of roof space. For that reason, the green apartments are still relatively small. In addition, it’s hard for them to be built in major cities due to mammoth high rises that could potentially block the sun on the much smaller solar apartment building’s roof. This is why most of these solar-equipped apartments are being built outside the cities.

Still, for an increasing number of folks in Japan, solar-equipped apartments present an opportunity to lessen their reliance on nuclear and fossil fuels, cut electricity bills and help spark additional demand for cleaner power generation. Not a bad deal.