Investments in the Clean Energy Sector

Sifting for Profits in Billion-Dollar Data

Moods start changing around this time every year.

If you're a cleantech investor, perhaps the release of 2009 investment and installation data has something to do with your improving sentiment. I know it does mine.

Every year around this time, reports abound about the previous year's activity.

Who invested how much and where? Which countries installed the most wind power? Solar power? So on and so forth...

One of the best such reports — called Clean Energy Trends 2010 — comes from my contemporaries at Clean Edge.

Its release is highly anticipated every year, and I thought I'd pass along some of this year's findings. We'll also see how these clean energy trends translate into real market profits.

Cleantech by the Numbers

Up front we learn that the public market thawed only slightly more in 2009 than in 2008. We witnessed 13 initial public offerings (IPOs) last year, as opposed to six the year before.

And as we've told you in these pages, global governments turned to cleantech growth as a means for economic revival during the recession. A healthy economy thrives on cheap energy.

But China has not-so-quietly taken the lead by far, and could spend as much as $660 billion over the next ten years making sure it emerges a dominant clean energy economy.

Government support like that coupled with a law requiring utilities to buy all future installed renewable energy capacity — wind, solar, all of it — will make China a hotbed of investor profits for years to come. (For more on that, check out my article today in our sister publication, Wealth Daily.)

Even as the global economy continued to fight off recession, the three major clean energy sectors — wind, solar, and biofuels — were able to grow their combined revenue 11.4% over the previous year.

The combined revenue of those three sectors was $139.1 billion. The report forecasts growth to $325.9 billion in the next decade. A picture illustrates this growth more clearly: 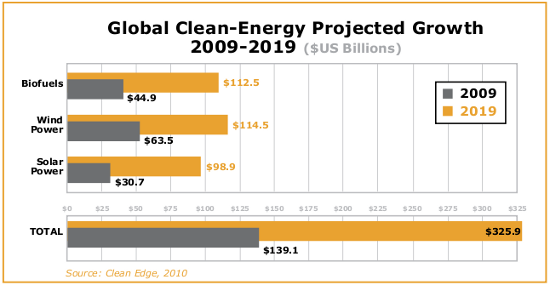 That means this already multi-billion-dollar industry will grow 134% in the next ten years. You know of any other industries doing that?

Let's say oil production grows to 100 million barrels per day by then (which it probably won't) up from 85 million per day today. That's only 15% growth.

The energy industry growing the fastest, therefore creating the most wealth, is clean energy.

There are two things to be said about biofuel...

First, it should cost the same or less than its fossil equivalent.

Second, we use 1.303 trillion gallons of oil each year, so 23.6 billion gallons is enough to supply the world's liquid fuel needs for only seven (7!) days.

The second won't change until the first does.

But the companies that can make it happen — that can produce competitively-priced biofuel — have a 1.279 trillion gallon gap to fill. And each of those gallons is worth at least $1.00. I know gas in my neighborhood is selling for $2.78/gallon. You do the math.

That's a $2 trillion biofuel market up for grabs annually. And investors are already rewarding the winners accordingly: 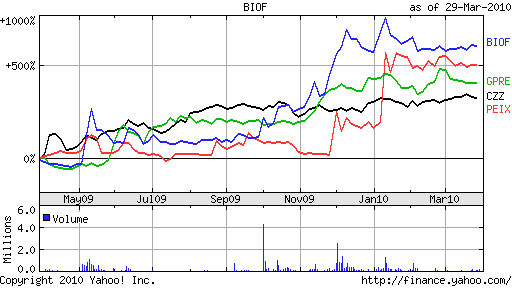 And we're still making this stuff with corn, soy, and sugarcane. Just wait until enzymatic and cellulosic companies hit the market, making it with wood and algae.

By 2019, Clean Edge is forecasting a $114.9 billion wind market — only slightly larger than the biofuel market at that time.

With a third of the installations going to China, wind companies operating there did best in the market, while European stalwarts continued to stutter.

It's all about being in the hot market... And they simply weren't in China to the extent they should have been.

I look for a rebound in those big turbine suppliers and the U.S and European markets continue to chug along. And I also look for installers operating in hot markets to do well.

Solar revenue came in at $30.7 billion for the year.

This is the first year since 2000 that annual solar revenues have fallen. But that's a better long-term indicator than it is a short-term problem.

The solar industry is coming of age. And, as in all industries, prices fall when that happens. Economies of scale are created, and so on.

So while solar installations were actually up in 2009, revenue fell just a bit. Solar is still forecast to be the biggest grower of the three, with a 222% increase in annual revenue to $98.9 billion by 2019.

As more panels continue to be installed and prices continue to fall, the companies producing at the lowest cost will make the most money. Margin is the name of the game at this point.

We've already seen Chinese companies undercut their European and North American competitors, with many setting up sales and production offices on U.S. shores.

The Chinese now account for 50% of all solar sales. I don't see this trend abating anytime soon. You can see how investors have reacted, with First Solar (NASDAQ: FSLR) and one-time world leader Q-Cells (XETRA: QCE) both losing value over the past year: 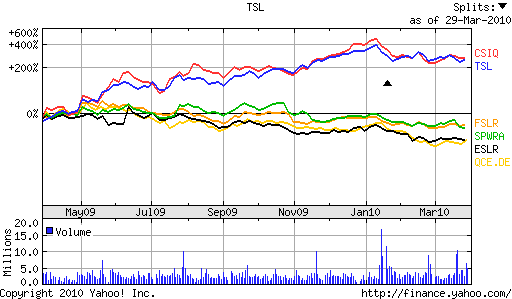 So that's the nutshell for 2009. We'll continue talking about these trends and numbers in our ongoing effort to help you better understand and profit from the green market.

In our premium services, members are constantly learning how to profit from these trends in real time, by buying the best companies in these sectors based on our research.