U.S. to Double Wind Energy Use

You should absolutely love wind energy.

If you live in the U.S., you should love it even more. 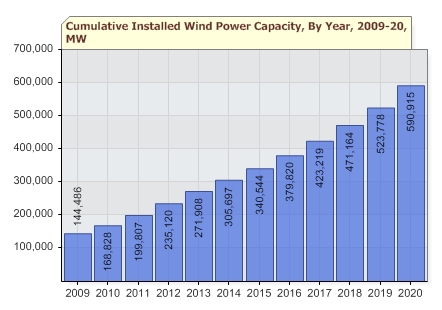 At that point, the U.S. will account for at least a quarter of global wind capacity.

It's a growth market if I've ever seen one. But trouble still remains in the credit and capital markets. In order to successfully invest in the wind sector, investors need to be familiar not only with the flow of capital to the cleantech markets, but also with national and state renewable energy laws, current and future transmission corridors, government funding, planned projects, and relevant companies.

Seems like a lot to stay on top of, I know. But I'm here to help you wade through it.

I was fortunate enough to be in the audience at the Renewable Energy Finance Forum-Wall Street a few weeks ago to catch a presentation from David Berry, Director of Finance for EDP Renewables North America.

Through EDP's acquisition of U.S.-based Horizon Wind Energy, the company has installed over 2,200 MW of wind capacity in the States. They've installed over 5 GW globally. Needless to say, I was interested in this man's perspective on investing in wind energy.

And he summed it up nicely with this graphic: 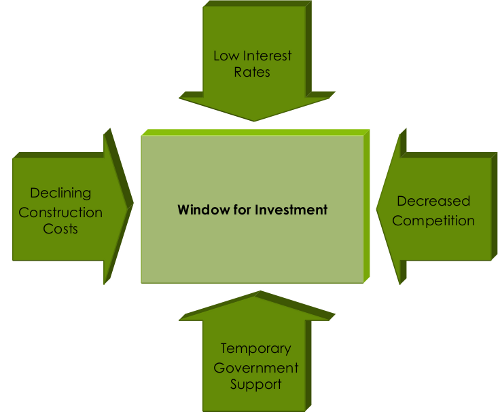 Basically, Mr. Berry is hinting at a perfect storm for investing in wind energy wherein the recession has driven down commodity prices and forced some players out of the game, resulting in declining construction costs and decreased competition.

Falling interest rates for project finance and government support via the stimulus and production tax credit make up the other two frames of this window for wind investment.

What's more, Berry (and his company) believe doubling U.S. wind capacity will require $50 billion of new capital. That won't all end up in the public market, but Green Chip will do its best to find out how much it does and when, then pass that info along to you.

But before the billions can flow and U.S. wind capacity can double, a few things need to be accomplished at the regulatory level.

At the top of Berry's list of what needs to be done to facilitate wind growth were the following two bullets:

In addition to putting a price on carbon and adopting a national renewable energy standard, it's not hard to see that transmission is the main hurdle for wind expansion. (The other two aren't hurdles per se, but rather expediting factors.)

One look at this chart makes it crystal clear. The places with the most abundant wind resources use the least energy, so the key is being able to deliver rural wind power to urban areas.

Energy is only profitable if it has an end market. So, developers are looking for sites that already have access to transmission or have plans for its imminent arrival.

If you're looking to invest in wind development companies, access to transmission should be high on your list of diligence items. Of course, transmission isn't a necessary requirement for turbine producers.

My colleague, Jeff Siegel, will have a new report on a future stalwart wind developer as early as tomorrow. This one company already has transmission deals in place in one of the largest wind markets in the country, so keep an eye out for it.

When it comes to turbine producers, the dominant players so far have been foreign. Even though GE has significant turbine market share, it's not a big enough chunk of their overall revenue stream to consider it a pure wind play.

Other big players like Vestas (COP: VWS), Gamesa (MCE: GAM), and Suzlon (SUZLON.NS) can only be bought individually through a commission-based broker or via an often thinly-traded Pink Sheets version.

If you want to hold a group of wind companies at once, you may want to check out a wind ETF like the First Trust Global Wind (NYSE: FAN). It should prove to be a good buy-and-hold as global wind capacity surges forward.