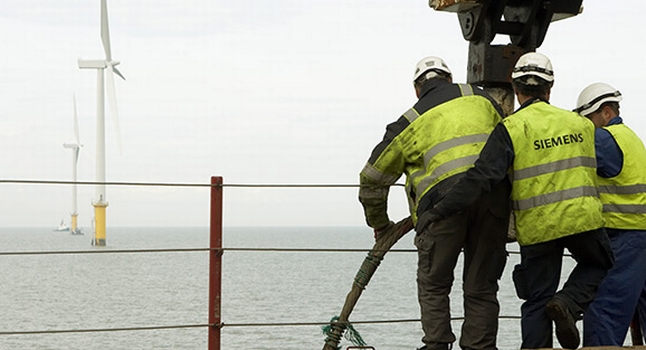 When it comes to understanding the EU, I'm not the brightest star in the sky.

And to be honest, after stumbling down a rabbit hole of proposals, directorates, and laws on the European Commission's website, I was even worse shape than before I started.

The European Commission is the EU's executive body that represents the interests of the EU as a whole. And just yesterday it made a decision that will result in a huge boost for wind energy in Germany.

So as many in the renewable energy game know, following the Fukushima disaster, Germany decided it wanted to put the kibosh on its fleet of nuclear power plants. In its place, the Germans would build out their wind energy capacity to make up most of the difference.

This is actually a pretty lofty goal, and of course it was heavily criticized by nuclear apologists and fossil fuel-powered knuckle-draggers. But you know, Germans tend to be a pretty industrious group of people, so I've never doubted their ability to get this done.

What I didn't realize, however, was that because the investment necessary for this wind energy development was so massive – about 30 billion euros – the European Commission would have to ensure that it didn't violate any state rules.

Yesterday we got word that the Commission has given Germany the go-ahead to proceed.

Here's a clip from the Commissions press release on the matter …

The European Commission has found that German plans to support the building of 20 offshore wind farms are in line with EU state aid rules. Seventeen wind farms will be located in the North Sea and three in the Baltic Sea. The Commission concluded that the project would further EU energy and environmental objectives without unduly distorting competition in the Single Market.

In October 2014 Germany notified plans to support the construction and operation of several offshore wind farms. Aid would be granted to operators in the form of a premium paid on top of the market price for electricity.

The size of each wind farm ranges from 252 megawatt (MW) to 688 MW and, in total, the projects will make available up to 7 gigawatt (GW) of renewable energy generation capacity. The total investment costs amount to € 29.3 billion. All wind farms are planned to start producing electricity by the end of 2019 at the latest. In total, they are expected to generate 28 terawatt-hours (TWh) of renewable electricity per year amounting to almost 13% of Germany's 2020 scenario for renewable energy given in the National Renewable Energy Action Plan (NREAP).

The Commission assessed the projects under its Guidelines on State aid for environmental protection and energy that entered into force in July 2014 The Commission found that the projects contribute to reaching Germany's 2020 targets for renewable energy without unduly distorting competition in the single market. In particular, the Commission verified that the state aid is limited to what is necessary to realising the investment. The rates of return that investors would achieve thanks to the premium were limited to what is necessary to implement each project and in line with rates previously approved by the Commission for similar projects. The Commission also took into consideration that these projects will enable new electricity providers to enter the German generation market. This will have a positive effect on competition.

Now Siemens (OTCBB: SIEGY) is the king of the castle when it comes to offshore wind turbines in Germany. Sadly, in the U.S., it only trades on the pink sheets now. But hardcore renewable energy investors are rarely scared off by pink sheets. Particularly pink sheets with market caps of $94 billion, like Siemens.

Of course, with such a huge undertaking – about 7 gigawatts of wind power – this will only add further momentum to the wind industry in general. Certainly GE (NYSE: GE), Vestas (OTCBB: VWDRY), and ABB (NYSE: ABB) will enjoy some residual momentum. Rising tides to indeed lift all boats.

Of course, with the Dow down about 325 points right now, I suspect few investors are too giddy over this news. But looking at this development from a long-term perspective, yesterday's announcement from the European Commission was a pretty big deal, and we'll be wise to invest accordingly.