Implications of the Gulf Oil Spill

BP (NYSE: BP) recently announced that the energy giant would pay all necessary and appropriate clean-up costs from the Gulf oil spill.

Not sure if that was a reaction to the "stern warning" from the White House, or simply something some unlucky PR schlub had to pump out to the media in an attempt to try and calm the masses...

Either way, most folks could give a rat's ass what BP says. It'll be all about what they do. That will be the test.

Because let's face it, after the 1989 Valdez disaster, the word of an oil company is about as reliable as the gas pedal on a recalled Toyota (NYSE: TM) Corolla.

Sure, Exxon (NYSE: XOM) did pony up a huge wad of cash to clean up their mess in Prince William Sound — after many, many legal battles. But as recent as last year, the company was still dragging its feet on safety.

Some Never Learn, and Some Just Don't Give a Damn

Across the globe, 151 countries have decided to ban single-hull vessels by 2015 because, according to experts, two hulls are better than one for preventing oil spills.

The EU actually stated that the single-hull design is simply more accident-prone. Interestingly enough, BP won't even use them because of the leaking risk.

Under the U.S. Oil Pollution Act of 1990, single-hull tankers are permitted to move through waters to unload at the Louisiana Offshore Oil Port until 2015.

Let's just hope one of those single-hull dinosaurs doesn't rip open like a sardine can within the next four and half years.

While environmentalists rally and politicians chase opinion polls, investors are now trying to gauge how this incident will affect energy and climate change legislation.

Let's face it: the only reason Obama dangled that offshore carrot was to lure a few Republicans to a place where some meaningful legislation could be hammered out. But with this latest spill, everything is on hold.

Last week, the President called for a thorough review within 30 days that would provide precautions necessary to prevent another incident like this from happening... which makes you wonder, why wasn't a thorough investigation undertaken before this happened?

Not a single Senator claiming to be an environmental crusader has ever stepped into those unpopular waters — until now.

And I won't even get into those folks in Washington who damned the utterance of stronger federal regulations on drilling, but are now begging for federal assistance to clean up this mess. I guess Bobby Jindal couldn't get enough coffee can donations from locals to fix this problem.

Meanwhile, both jack ass and elephant are positioning for what could be a backlash against oil drilling. This could be a problem for both sides, as you'll get no expansion of solar, wind, or electric vehicles without expanded offshore oil concessions.

Personally, I don't see anyone putting the kibosh on offshore oil. Sadly, most folks will forget about this by the end of the month, but they will see the price at the pump every week.

So for investors concerned about this spill derailing an energy and climate change bill that includes offshore drilling... I wouldn't lose sleep over it.

In some shape or form, a new energy or climate change bill will be introduced, debated, and passed.

And rest assured, it will include offshore drilling. But it'll also include plenty of support for the domestic expansion of renewable energy and alternative transportation systems and fuels.

In the meantime, let me leave you with this... A little over a month ago, my colleague, Nick Hodge, spent a weekend fishing for Amberjack and Red Snapper in the Gulf. 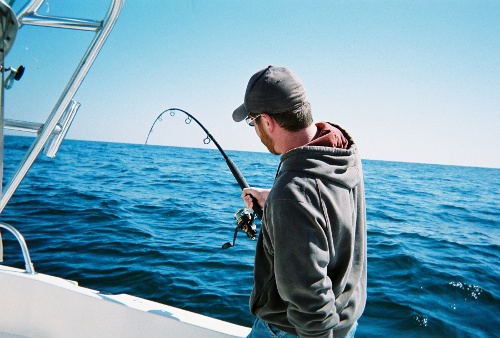 Blue waters, a 45-pound Amberjack on the line.

Take a good look... It'll never look like that again.