Here at Green Chip Living, we've been dubious about the recent decision to open the Gulf waters to commercial fisherman.

Now, Gulf fishermen themselves are speaking out against what they feel is a premature ruling.

Many fishermen and shrimpers fear that the water is still rife with a toxic mix of oil and dispersant.

“Why would we lie about oil and dispersant in our waters, when our livelihoods depend on our being able to fish here?” commercial fisherman James “Catfish” Miller told journalist Dahr Jamail.

“I want this to be cleaned up so we can get back to how we used to live. But it doesn’t make sense for us or anyone else to fish if our waters are toxified. I don’t know why people are angry at us for speaking the truth. We’re not the ones who put the oil in the water.”

To prove that the waters are still contaminated and unsafe for fishing, Miller and his crew brought Jamail along with them to document the damage along the Mississippi Sound.

Whenever the boat's sonar detected a large enough cloud below, they dropped a weighted absorbent pad in the water. They dropped it eight times, and each time it came up it was covered in a slimy mix of oil and dispersant. One such drop was less than a mile from public beaches.

“They say, if it's here prove it. That's what we're doing. And we're just uneducated fisherman. If we can find it, anyone that wants to can find it,” said Mark Stewart, another commercial shrimper.

Here's a video that the Bridge the Gulf Project shot of one of the fisherman's trips into Mississippi fishing waters earlier this month:

Ironically, Miller was trained by BP to identify both oil and dispersant as part of their Vessels of Opportunity (VOO) program. Now he's using that knowledge to warn officials of the lingering danger.

The VOO program employed many Gulf shrimp trawlers to help identify and skim areas where oil is found, and then call in coordinates to BP.

According to Miller and Stewart, BP hired outside contractors to come out in 'Carolina Skiff' boats equipped with 375-gallon tanks of dispersant and hose the oil patches down. That dispersant merely spreads the oil and hides it from view, sinking it to the bottom of the ocean, according to Ian MacDonald, an oceanographer at Florida State University.

“Dispersant is being used to sweep this stuff under the rug, instead of remove it from the house and that is a matter of grave concern if that's what's happening on a broad scale,” MacDonald told Democracy Now.

There are currently no solid long term testing to prove whether dispersant is safe or not.

According to the Bridge the Gulf Project, the fisherman have three demands:

I don't know about you, but when I hear conflicting reports like this, I'm reminded of the Latin adage cui bono, or "To whose benefit?"

And since fisherman like Miller and Stewart have nothing to gain and everything to lose, it may be worth listening to their pleas instead of those of BP and the government agencies who simply want to put this mess behind them. 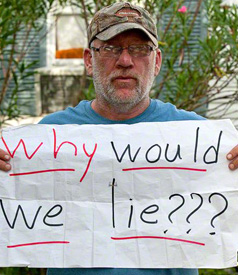