Shake Shack (NYSE: SHAK) is down about 10 percent right now on a decent amount of volume.

Of course, the stock was also sitting above $90 this morning, which is absurd.

I actually recommended this stock shortly after it went public. I think it's a great company, and at the time was a great investment opportunity. But as you know, we dumped the slick burger chain last week after the stock broke above $75. Although the company has a great future ahead of it, the stock flew too high, too fast. At least for my risk-averse taste.

Since selling the stock, it climbed another 28% - giving me a little pain in my belly, as that's a lot of cash we left on the table. But the truth is, the stock was just getting too top-heavy, and I didn't want us to lose the gains we already locked in. Better to be safe instead of sorry.

In any event, the stock is selling off a bit today. Some of this may have to do with the broader market, though, so it's hard to determine right now whether or not SHAK is at the start of a correction. We'll find out shortly.

In the meantime, I have no intention of trading the stock on this dip. At $85, it's still trading well above what I think it's worth.

First Solar (NYSE: FSLR) is also taking it on the chin today, down about 8 percent right now.

The stock was recently downgraded by RBC Capital, having its price target moved from $54 to $34. Analysts noted …

Given the company's high exposure to utility scale projects and the long lead-time and development cycle of those projects, we do not see upside surprise to our project revenue estimate.

In the past, First Solar was able to win large utility-scale project contracts with lower efficiency Cadmium Telluride (CdTe) due to its lower cost. Driven by significant decline in polysilicon price and manufacturing efficiency improvement... First Solar may lose its cost advantage for the whole system compared to competitors using multicrystalline silicon technology.

I actually think RBC is underestimating the company's ability to thrive in a more competitive market.

I maintain the FSLR is solid play in the solar space, and a $60 price target is not out of the question. That being said, I have no intention of picking up new shares on this dip. It's just not significant enough. If the stock continues to fall, I may reconsider, but would be unlikely to make a move unless we see it break below $45.

In the world of food, Taco Bell made an interesting announcement today …

As reported by Bloomberg:

Taco Bell, which won over younger customers with unorthodox creations like Doritos-shelled tacos and fried cinnamon-bun balls, is now trying to appeal to millennials in a different way: cutting unnatural ingredients.

Taco Bell will remove artificial colors and flavors, high-fructose corn syrup and trans fats from 95 percent of its menu by the end of the year, Brian Niccol, the chain’s chief executive officer, said in an interview. The upgrade won’t result in higher prices.

“I want people to know that when they choose a chalupa, they can feel great about choosing that chalupa because it’s affordable, it’s craveable and we put the highest-quality food out there for them to enjoy,” Niccol said. “People just assume that in order to do this, things have to become more expensive. That’s a myth.”

Sheesh, this is so stupid!

I don't understand why so many of these fast food joints are trying to compete with companies like Chipotle (NYSE: CMG) and Panera (NASDAQ: PNRA) by offering “better ingredients.”

Look, just because Taco Bell, which is owned by Yum! Brands (NYSE: YUM), will remove artificial colors, flavors and high-fructose corn syrup from its menu, doesn't mean the food is particularly healthy. 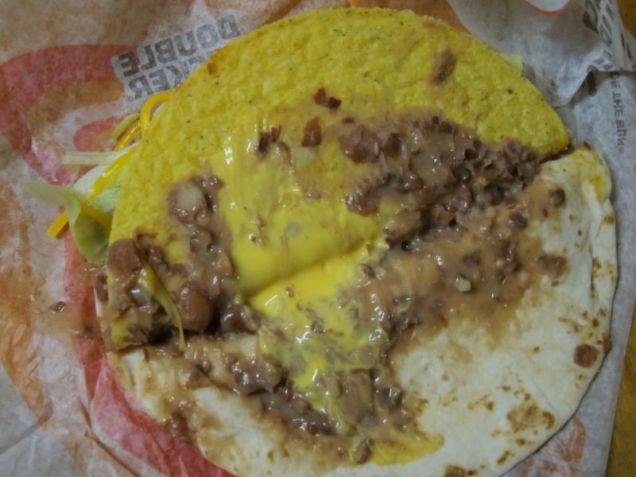 The meat the company uses is still some low-quality, industrially-produced toxic slop. Nearly everything on the menu contains GMO corn or soy, and I'd be willing to bet that any vegetable the company uses as toppings or in its sauces was bathed in pesticides.

I also love how the CEO of the company assures folks that the “upgrade” won't result in higher prices. Well, yeah, because it's not really an upgrade in food quality. Use better quality ingredients, and it'll cost more. Use garbage, and you can still get yourself a couple of cheap, tasteless tacos for a bit of pocket change.

Of course, I should note that YUM stock has actually been on a tear this year. Check it out … 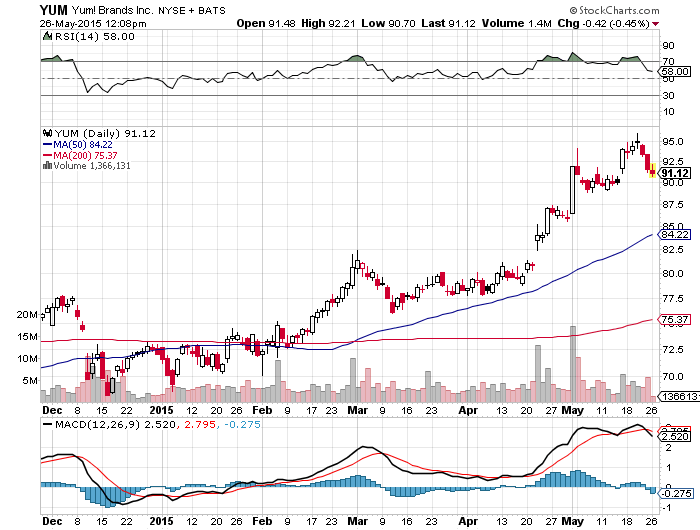 Since Yum Brands does not align with our values, certainly this is not a stock we'd ever recommend. However, while the “food” YUM peddles is beyond disgusting, and likely incredibly dangerous to eat on a regular basis, the stock has performed quite well since early January, moving from around $70 to nearly $96.

I suppose the silver lining would be that you could use those fat gains to pay for your coming medical bills.

In the meantime, I maintain that YUM management is wasting a lot of time, energy, and money trying to create the illusion that it's offering healthier options.