Leverage is the Key to Change for Green Century Funds 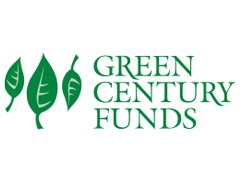 We've been investigating the greenest of the socially responsible mutual funds recently; observing the history and continuing potential value these investment vehicles carry. From the peace-loving investors at Pax World to the solar-minded investors at New Alternatives, we've touched upon the pioneers in the space.

Today, we're going to look at another pioneer in the space that is a leader in both transparency and in environmental advocacy: Green Century Funds.

Boston-based advisory firm Green Century Capital Management was formed in a partnership of a handful of nonprofit environmental advocacy groups. Its primary stance wasn't to provide an investment vehicle for the socially conscious investor, but rather it was to act as an activist shareholder on important environmental issues.

Its two funds, Green Century Equity (GCEQX) and Green Century Balanced (GCBLX) have both served as forces for change in corporate environmental responsibility.

We're going to focus on the Equity fund this time around, and take a look at some of the big strides Green Century has made in the field of socially responsible investing.

GCEQX is a large-cap fund, focusing on companies with more than $1.2 billion in assets. Its objective, besides the aforementioned advocacy, is long-term positioning.

Like all SRI funds, Green Century adheres to a series of environmental, social, and corporate governance (ESG) screens to determine what companies can go into its portfolios. It does this mostly by only investing in stocks that make up the Morgan Stanley Capital Investment (MSCI) KLD400 ex-fossil fuels index.

Green Century Equity's returns have generally been lower than the S&P 500. One year return rate is 17.16%, three year is 21.14%, five year is 13.9% and ten year is 6.73%. These were the self-reported figures for last year, Bloomberg tracked slightly different results for the same period.

Cleaning up the Palm Oil Problem

Palm oil is an extremely common vegetable oil extracted from the African oil palm tree, and large-scale production of the oil has been shown to be a major cause of jungle deforestation. The World Wildlife Fund found that an area about the size of 300 football fields is cleared every single hour to produce palm oil, and this is driving both climate change and wildlife extinction on an unprecedented scale.

The reason why this is a big deal is that GCEQX's largest stake was in Procter & Gamble, with 3.35% of its net assets there. Unsurprisingly, P&G is also the largest company in the KLD 400 index, and one of the largest palm oil buyers in the world.

Over the last few months, Green Century has gotten zero-deforestation commitments from the likes of Kellog's, Smuckers, and ConAgra. P&G, likewise set a goal to end deforestation in its supply chain by the year 2020, clearing up some of the potential negative screens for the company in the portfolio.

This isn't the only fight Green Century has engaged in recently.

In 2010, Green Century Capital Management stepped up to eliminate Bisphenol A (also known as BPA) from food packaging. The chemical is used in hard plastics and can linings, and has been shown to mimic estrogen and possibly contribute to hormonal disorders in those exposed to it.

The fund put together a corporate report card that gave 26 companies different grades based upon their efforts to eliminate BPA epoxies from their packaging.

Companies like Hain Celestial (Health Valley, Earth's Best), ConAgra, and H.J. Heintz were all leaders in the area, while Coca-Cola, Del Monte, Kraft, Unilever, Kroger, Wal-Mart, Hormel, and many others were found to be lagging in their abandonment of BPAs. Some companies didn't even cooperate with Green Century in the study.

In this fight, companies aren't turning around as quickly as they have with Palm Oil. This is because the international scientific community hasn't turned up strong evidence to support claims that BPA is harmful to humans.

It might be a cause that requires further information from scientists, but it's a mantle that Green Century still carries.

These types of changes create big waves in industry and disrupt other companies simply by virtue of shifting demand. If Campbell's were to abandon its use of BPA in its canned goods, it could significantly change the fortune of chemical and materials companies who provide the raw materials for the more than 2 billion cans Campbell's sells every year.

By starting a change, you're guaranteed to be ahead of it, and that's one of the major strengths of Green Century.  It leads change rather than falls victim to it.

Such was the case with carbon footprint reporting.

On September 25, 2014, a group of institutional investors signed the Montreal Carbon Pledge, promising to annually disclose the carbon footprint of their investment portfolios. The signatories agreed that there is a long-term investment risk associated with greenhouse gas emissions, climate change, and carbon regulation, and that openness was the key.

By the time these funds disclose their first tallies of their carbon footprints in 2015, Green Century will have been doing it for six years.

It was the first US-based investment firm to disclose its funds' carbon footprints. Green Century's Balanced Fund (GCBLX) now claims to have just a little under half of the carbon footprint of the S&P 500.

It's a real leader.