There's a contradiction within our country over a natural resource more valuable and vital than gas and oil...

Just days ago, Sarah Palin addressed the community at South Valley College in California as a keynote speaker, where she made clear the effect the government's limitation of water pumping is having on citizens of the already drought-stricken Golden State.

“This is a government imposed drought that needs to be reversed,” the former Alaska governor said. “We are taking away people's livelihoods by shutting off their water.”

Just a month earlier Palin said one of the reasons for this water shortage in California was “a faceless, dim government bureaucrat took away their lifeline, their water. And they claim it was in order to protect a two-inch fish. Now where I come from, we call that bait. And there is no need to destroy people's lives over that bait.”

While Palin's quick with the one-liners about bait, she fails to see the irony in her own words — something to think about as we sit high on the 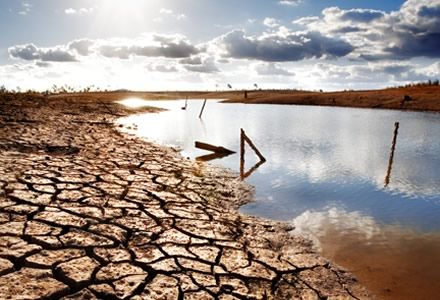 food chain, gazing down upon the long fall from the top...

Nonetheless, a war over water is not an illusion.

And the stakes are high.

So it's no surprise that Google is staking its claim early...

GOOG has joined forces with the Pacific Institute to tackle the burgeoning water crisis in the United States with an application to increase the use and availability of public drinking fountains.

It's called WeTap, and it works on mapping and improving drinking fountain infrastructure and re-educating the public on the accessibility of safe tap water.

The WeTap effort is currently being beta-tested in the San Francisco Bay Area and in Los Angeles with Android phone users with Gmail accounts and Picasa.

The application is crowd-sourced, similar to Google Map Images. It allows users to locate a water fountain in crowd-sourced locations and watch as new fountains are added daily.

Google and the Pacific Institute invite the public to help them during beta-testing. You can read more about WeTap and find information on becoming a beta-tester via the project's website, WeTap.org.

You see, one of the greatest drains on our fresh water resources is the mass production and consumption of bottled water. As one of the project's reps stated, “[Drinking fountains] have been disappearing, one by one, from our public spaces, parks, offices. And yet, it has become easier and easier to find expensive and environmentally damaging commercial bottled water.”

To add insult to injury, the Pacific Institute estimates it takes approximately 17 million barrels of oil to produce all those bottles — in other words, enough to fuel more than 1 million cars and light trucks for an entire year.

But the big picture here is water, especially when you look at the data...

The three major rivers that provide water to eight U.S. states are endangered, thanks to excessive droughts, floods, and crop failures.

According to a report from the Department of the Interior, the Colorado, the Rio Grande and the San Joaquin Rivers are expected to face an 8% to 20% decrease in average annual stream flow.

Furthermore, over the past century, the frequency and severity of long durations of drought has slowly increased. Recent government figures actually show that at least 36 states are likely to face water shortages by 2012 because of rising temperatures, population growth, urban sprawl, waste, and drought.

And the situation to come in a few more decades is even bleaker.

We should prepare to wave goodbye to 20-minute showers and watering our manufactured lawns in the desert. And we certainly can't conserve water while throwing back 16-oz bottles of Deer Park and Evian...

But hey, at least Sarah Palin is there to put everything into perspective for us.

I wonder how the former governor would feel if she was like nearly a billion other people in the world who have to walk a mile or more a day to access clean drinking water...