Ethical Investing for the Carnivore 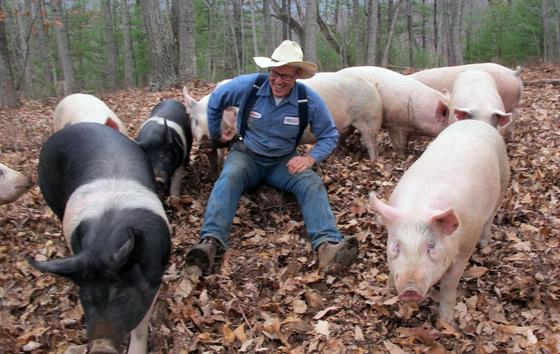 When I go fishing, I like to clean my catch the minute I reel it in.

While some of my fishing buddies think I'm crazy for wasting valuable fishing time by doing this, I find it in line with my desire to cause the least amount of pain and distress for the fish.

It is my intention to prevent any unnecessary suffering while ensuring no part of the fish is wasted. This animal is being sacrificed so that I can eat. The least I can do in return is ensure this sacrifice isn't trivialized.

Of course, I know I'm in the minority on this one, but that's OK. There's no harm in following your own path. Although for those who claim to honor all God's creatures, it's worth noting that there is no honor in being disconnected from your food. In fact, I would argue that many of us in the United States are particularly wasteful because of the fact that we are not connected to our food.

If we had to grow, raise, and slaughter our own, I suspect there would be a huge decrease in the amount of food that ends up in the trash.

That being said, the market has enabled most Americans to enjoy the privilege of buying their food without having to get dirty. And this is a good thing. It has allowed for economic efficiencies, convenience, and prosperity. But with this privilege comes responsibility. And this is where we have fallen short.

How did we get here?

By not taking the time to know where our food comes from or how it's raised, grown or slaughtered, we have become numb to the sanctity of life. We no longer hold food to be sacred, and that in itself is a tragedy of epic proportions.

Most folks spend more time choosing a color for their smartphone cover than they do investigating where their food comes from. And this is really bizarre when you consider that without a smartphone cover, your smartphone could get scuffed up and dirty. But without food, you die.

So how did we get here?

How did we get to this place where aesthetically-pleasing electronics have taken priority over that which fuels are bodies and nourishes our souls? It's hard to say, but one thing is certain: Any efforts taken to re-connect us to the food we eat should be met with great applause and humble gratitude.

A Freezer full of Protein

Last week, I read a story about a slaughterhouse in Vermont that has public viewing windows which allow visitors to watch how animals are turned into food.

The name of this operation is the Vermont Packinghouse, and as reported in Civil Eats ...

...for those who want to observe it—an act that can require courage and vulnerability, but that can ultimately spark greater respect for animals, for meat, and for meat industry workers—Vermont Packinghouse quietly offers the opportunity, and with some degree of pride.

While some may find such a thing horrific, I find it to be quite respectful. Particularly because this slaughterhouse seeks to ensure that the animal isn't mistreated or forced to suffer a painful death.

Anyone who calls in advance or stops by during business hours can be let in to observe, through the two small windows, the process by which live animals become food: the quick shot that renders the animal desensitized to pain; the hoisting of the animal by its legs, so it can bleed out; the splitting of the carcass; the removal of the hide and the insides.

No animals were being slaughtered on the first day I visited, but on a second visit I watched a large veal calf from Lisa Kaiman’s Jersey Girls Farm going through the process.

It took less than 30 seconds before the kill floor foreman, Cory LaCroix, managed to quiet the animal enough to place the captive bolt gun to its forehead and immediately desensitize it to pain. The animal did writhe, but Arion explained that this is because the cow’s cells and nerves in the individual muscles can remain active for two hours after death. (Workers confirm whether a stun was successful by touching the animal’s eye—if the animal doesn’t flinch, the stun was a success.)

The calf was then shackled by its hooves and hoisted upside down. As “Sweet Home Alabama” played on a radio, Cory and other workers bled out the carcass, split it in two, and removed the hide. Arion likes to say the Packinghouse uses “everything but the moo,” so the hide would go to JC Rendering out of New York State, the organs would be turned into offal, and everything else not given back to the farmer would be rendered and turned into pet food.

Outside, there are holding pens for the animals that were designed by Temple Grandin’s firm, so they meet the high standards that Grandin, a pioneer in humane livestock handling, has set. High walls and a horseshoe design keep animals calm as they walk through. The entire plant has been positively reviewed by Animal Welfare Approved.

It may sound harsh, but the way I see it, if you don't have a problem eating meat, then you shouldn't have a problem watching the sacrifice that results in a freezer full of protein. Anything less is a complete disconnect that shields us from truth and trivializes the life of the animal.

Interestingly, most slaughterhouses go out of their way to ensure no one sees what's going on inside. And there's a reason for that. Most slaughterhouses are houses of horror, where animals are handled like soulless widgets, mistreated from birth until death by a system that rewards violence. Of course they don't want anyone to see that.

So kudos to the Vermont Packinghouse. And kudos to investors who are smart enough to invest in these types of operations, as not only are such investments good karma, they're fantastic profit opportunities if you know what you're doing and how to best structure a deal the rewards both parties.

The future of agriculture in the U.S. will look remarkably different than what plagues us today. And this transition will be facilitated by food pioneers and ethical investors. Which are you?