Despite a drop in the key United States Oil Fund ETF (NYSE:USO), solar ETF shares are decoupling and outperforming other key energy ETFs over the past week.

The reason is an action-packed July where the U.S. and China both promised huge flows of money into solar power projects. 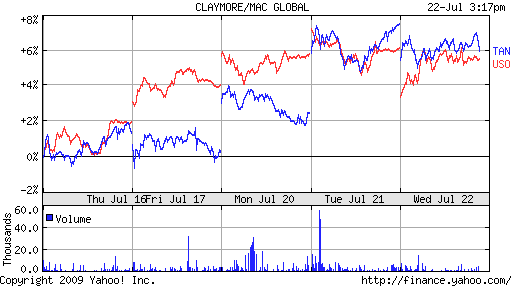 Earlier in the month, the U.S. Department of Energy and Treasury Department announced a joint plan to pay up to $3 billion worth of incentives to renewable energy installers nationwide.

That superseded an earlier scheme which was based around investment tax credits (ITCs).

In Beijing, the Chinese government came out with a three-pronged, multi-ministry approach to stimulating the domestic solar market with 2.6 GW of total solar subsidies through 2011.

In just the next two years, China's Golden Sun solar subsidy, from the ministries of Finance and Science & Technology, will subsidize 640 MW of solar photovoltaic installations (PV) across the country.

The Ministry of Housing and Urban/Rural Construction will administer a 500 MW subsidy package for BIPV (building-integrated PV). That includes more funding for R&D on advanced electricity-generating windows and similar products.

The National Development and Reform Commission (NDRC), a long-time proponent of "Green GDP" goals, is in charge of a national feed-in tariff that will help bring newly installed systems into the utility grid network. NDRC money will go towards payments to residential and commercial solar customers for excess capacity sold back to the grid.