Is energy efficiency more cost effective and better for the economy than replacing nuclear power plants?

The folks over at Energy Savvy seem to think so. And they do a damn good job at backing up their argument, crunching the numbers and offering the following. . .

In this comparison, a new nuclear power plant is expected to last 40 years and produce at the U.S. average of 12.3 billion kilowatt-hours (kWh) per year. The levelized cost of electricity for a new nuclear plant that we’re using is 8.4 cents per kWh, which includes the cost of financing, building and operating the plant for 40 years. The total cost for this plant and its power for 40 years is $41 billion.

Instead, if you want to retrofit enough houses to eliminate the need for 12.3 billion kWh per year, the calculation works like this: A typical electrically heated U.S. home uses 20,000 kWh per year, which can be reduced by 30% with a $12,000 energy retrofit, based on various industry estimates.

Job creation, in each case, looks like this: At peak construction, building a nuclear power plant would employ as many as 2,400 workers, eventually leveling out at around 400 to 700 long-term employees. For the home retrofits: According to Matt Golden, Policy Chair for Efficiency First, retrofitting 1,600,000 homes in a year would create roughly 220,000 jobs.

They even put together this infographic that I strongly recommend you share with others. 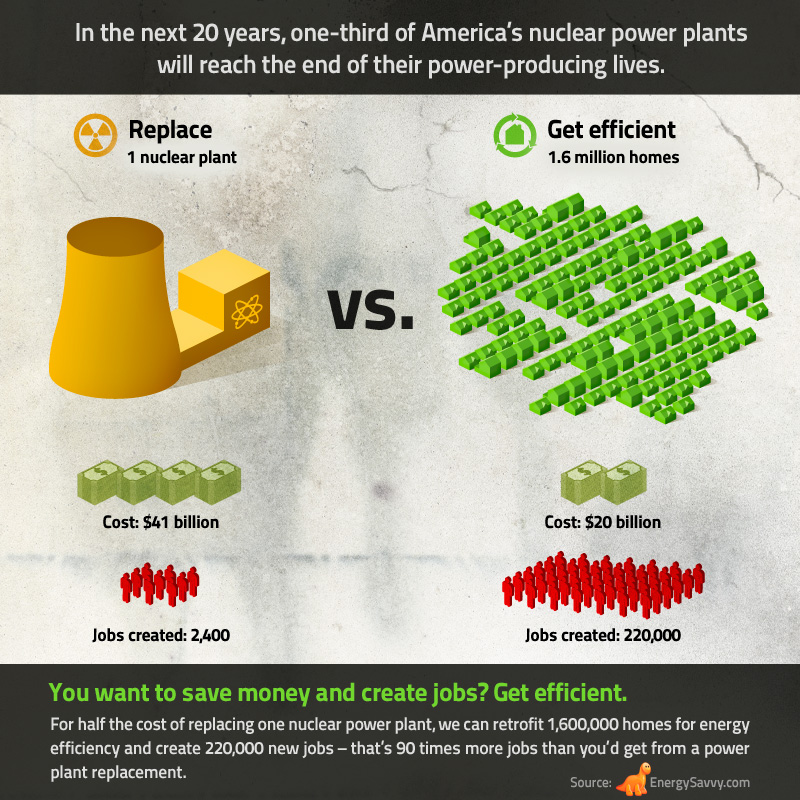