Dubai and Masdar City: A Study in Contrasts

Looking at the world through the lens of energy investing and peak oil, it's hard to imagine a starker contrast than Dubai World and Masdar City.

Both will rise out of a barren wasteland of sand in less than three decades, but only one was designed to survive the future.

Dubai World was built to serve up the ultimate in luxury and decadence: Indoor ski slopes in one of the hottest places in the world. Architecture straight out of a sci-fi novel on three artificial archipelagos built into the sea. Refrigerated beach sand. Floating tennis courts. The world's largest shopping mall, featuring luxury goods, and entertainment. The world's tallest building. Hotels featuring independently rotating floors, or underwater views, or rooms with eight attendants each. And so on, ad nauseam.

Suffice it to say there's a reason why after Never Land, Dubai was the one place in the world that Michael Jackson wanted to call home.

Lacking a significant endowment of oil, Dubai sought to be the financial hub and the Las Vegas of the Middle East. Its revenue is almost entirely derived from high-rent tourism and servicing the enormous flow of petroleum capital generated by its neighbors.

But the gleaming glitter hides a dark underbelly. Those fantasy buildings were constructed on the back of slave labor from places like Ethiopia, Bangladesh, and the Philippines. While Western ex-pats live the high life drinking Moët on the beach and being waited on hand and foot, laborers do backbreaking work in the desert heat, making $5 a day... their passports confiscated, their liberty denied. Subsisting on meager rations and insufficiently desalinated water, they're forced to live in stinking, cramped, unventilated concrete ghettos an hour's bus ride away, conveniently out of sight of the rich patrons.

Convoys of trucks haul sewage out of Dubai every night because the sewer system cannot handle the load. Much of the excess gets dumped illegally into the sea, leading to unsafe, contaminated waters at the very beaches of its ultra-luxury hotels.

In the long history of empire and the excesses of the rich, there is nothing unusual about any of that of course. All great empires were built on the backs of slaves at one time or another and all committed their eco-sins. My point here is the utter unsustainability of the strategy.

Predictably, the bursting of the global real estate and financial bubbles took the air out of Dubai as well. 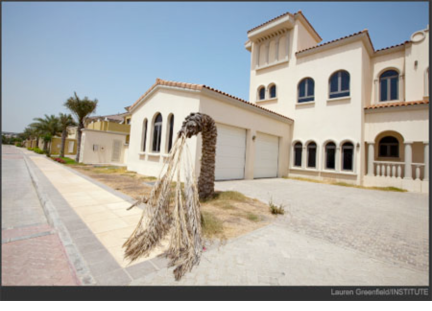 Dubai's new flagship hotel, the Atlantis, stands unfinished — its roof leaking and its rooms unwanted — on an enormously expensive artificial island. Its structured financial products, supposedly compliant with Shariah law forbidding the charging of interest, were discovered to be — surprise — not so clean. It's like an echo of the SEC's and rating agencies' complicity in enabling the subprime debacle.

Now Dubai faces sovereign default as collateral damage of the global hallucinated wealth meltdown. The news that Dubai had asked its creditors for a six-month freeze of interest payments on $26 billion in debt related to Dubai World ripped through the financial world, temporarily raising the specter of a domino effect. (The markets quickly shrugged off that fear however, realizing that the damage would be mostly contained and local.)

Masdar: City of the Future

Less than 100 miles away from the broken dream of Dubai World, a new city based on a very different dream is rising in Abu Dhabi. Masdar City aspires to be the world's first carbon-neutral, zero-waste city, a happy oasis six kilometers square with its own micro-climate, supporting 50,000 people in renewably powered harmony with nature. 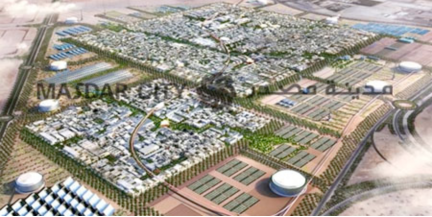 The first phase of the project is already under way. Construction of the Masdar Institute, a higher learning institution that will explore new green technologies and shepherd the best ones into commercial development, is slated for completion next year; its courtship of the world's top cleantech companies and investors has commenced. The Institute aims to be a world-class research and development hub for the solutions of the future.

Ironically, Masdar City is the dream of Sheik Mohamed bin Zayed Al Nahyan — the Crown Prince of Abu Dhabi, one of the most oil-rich emirates in the UAE. Abu Dhabi claims 92 billion barrels of oil reserves, and produces 2.7 million barrels per day of oil — 85% of the UAE's total output. That's a $1.5 billion-a-week revenue stream, and the reason why Abu Dhabi has the world's richest sovereign wealth fund, worth over $700 billion.

But rather than spend it on lavish amusements and trifles as its sister did, Abu Dhabi intends to use its vast oil wealth to invest in the future. The royal family knows better than most that the punch is running low, and the oil party will be over in 30-50 years. Accordingly, it has committed $14 billion — with another $8 billion expected from outside investors — to build Masdar City as part of a 20-30 year effort to transform itself into a high-tech industrial and knowledge economy.

While the world's oil addicts continue to line up for another hit of its dwindling stash, Abu Dhabi will be weaning itself off hydrocarbons, building a semiconductor industry and turning out some of the most advanced renewable and efficiency technologies in the world. In sha' Allah.

Of course there is no guarantee that Masdar City will prove economically viable, particularly amidst a real estate collapse. And there is an exceptionally high risk of technology failure. It could turn out to be a supersized 21st Century equivalent of the failed Biosphere project — mankind's last serious attempt at maintaining an artificial, zero-footprint environment.

Yet, it's almost unimportant whether Masdar City succeeds as the model city of a sustainable future or fails as an expensive boondoggle. As the world's first comprehensive experiment in integrating the whole spectrum of green technologies at a city scale, the results will be invaluably instructive to the reengineering of the rest of the world.

We'll have a much better idea of exactly what technology can (and can't) do. The winners that emerge from the proving ground of Masdar City will be overnight sensations and turn more than a few penny stocks into green chips.

The Past and The Future

In reality, the men behind both Dubai World and Masdar City are closely related and their investment objectives intertwined. At the very least they share a common interest in securing for themselves a prosperous future as the twilight of oil fades to black.

I have contrasted the two cities sharply to make a larger, and perhaps a moral point.

When one thinks of Dubai today, one conjures Rome... Icarus... Easter Island... the frothy head on a just-poured beer. She is the very image of the Age of Oil, in which the value of every dollar "made" was ultimately derived from cheap and easy petroleum. As oil peaked, her lavish beauty wilted. Now, the wrinkles have appeared, the plastic surgery has become a ghoulish mask, and the enticing sway of her hips has been replaced by a halting limp. Her day is gone.

Whereas Masdar City is like a phoenix, rising from the soot of the fossil fuel age and the ashes of a consumptive, wasteful way of life. She's hot, young, and sexy, and she wants to dance. She stands atop the very heart of the world's remaining oil reserves, offering the hope of a sustainable age after oil. She is the future.

As the excesses of the first half of the Age of Oil gives way to the deprivations of the second half, Masdar City represents humanity's best shot at renewal. May she live long and prosper.

P.S. Just as Dubai is using Masdar to hedge against the end of oil... you can use it to create vast personal wealth. In a new report, we spell out exactly how to harness the power of Masdar — and all the wealth it will create — for your personal portfolio. Click here to read it now.