Where's the Next Half a Trillion Dollar Opportunity?

Knowing this, the U.S. government has been leading a clean energy and environment "trade mission" to China.

One of the results of that trade mission was the signing of a 10-year framework that will expand cooperation in areas such as clean electricity production and transmission, as well as efficient transportation.

According to David Bohigian, the U.S. Assistant Commerce Secretary"

The 10-year framework we put in place includes transportation technology, clean energy technology, clean water, clear air, and forestry and wetland protection. What we are doing now in the first year of the plan is to develop deeper relations and really build the trust that will make sure we meet our goals, such as China's five-year plan.

This, of course, is contrary to the popular notion that China is a neophyte in the area of clean energy. The Bush administration actually used China's lack of initiative regarding clean technology as their main reason for not ratifying Kyoto. Now, they're signing decade-long clean technology cooperation agreements with them. Go figure.

But despite the commonly held notion that China is behind the new energy curve, they actually have some very progressive energy policies and targets.

As the second-largest energy consumer behind only the U.S., the emerging Green Dragon is proving to be a hotbed of investment activity for clean technology.

Let's go over some of China's energy aspirations and take a look at how they're proceeding so far.

China, for as quickly as it's developing, is actually doing quite a good job in making sure policy keeps pace with growth.

With such a huge population—1.3 billion and climbing—and a growing thirst for energy, Chinese officials know they need to progress very carefully to ensure they have enough energy to sustain growth.

Yes, China is still heavily dependent on coal. But they're also the world's largest user of hydroelectric power, and they'll continue to dominate that arena upon the completion of the Three Gorges Dam, which is already producing copious amounts of power with more generators still to come online.

But China knows coal is dirty and finite. And they also know that nearly all the good hydroelectric sites have been exploited. So, almost by default, they know they need clean energy in China.

Here's how they're going to get it:

So let's see what China's done so far.

Under this umbrella category, I'll cover the major clean energy industries in China, their current and projected growth rates and capacities, and any relevant investment opportunities in each. 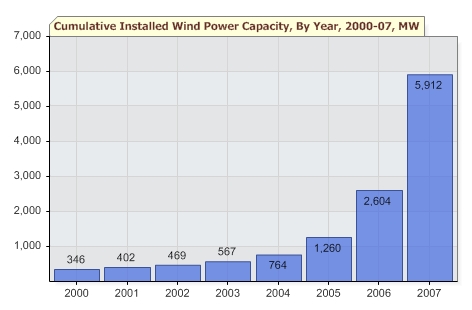 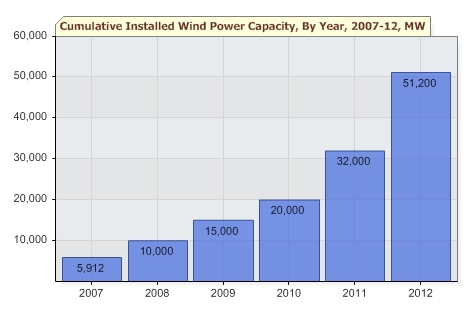 Here are the largest wind companies currently operating in China, along with their 2007 revenue from wind installations in that country:

Solar energy in China has been nearly as prosperous. 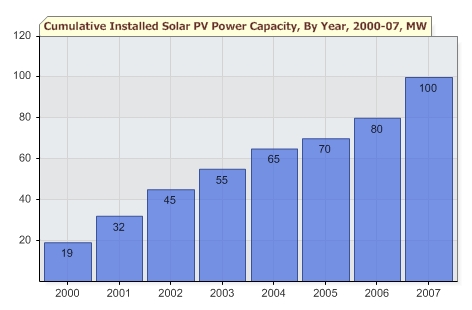 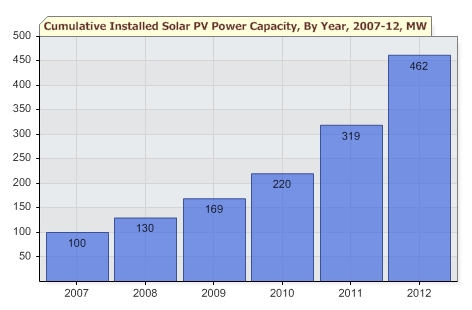 Of course, this doesn't take into consideration the massive amount of solar panels coming out of China that are used in other countries.

Other than Germany, China is the only other dominant producer of solar cells and modules. In fact, with their low production costs, China is expected to begin supplying an increased portion of European and U.S. solar materials.

Indeed, the clean energy boom in China is just getting started.

For the past few years, China has been slowly building its portfolio of clean energy technologies.

Now, with a global pullback in stocks, the time is approaching to start adding these future gems to your portfolio.

China's appetite for energy is only going to surge upward, along with their booming population.

Not only will China be using their growing energy expertise to satiate its own demand, but it will also be exporting its technology to Europe and the U.S., as evidence by the already signed 10-year cooperation agreement.

Even though the global economy is in a downturn, prosperity will return to China. Getting in now, before the major growth kicks in, will surely prove to be a boon to any investor's portfolio.

With that in mind, Green Chip International is devoting a portion of its portfolio exclusively to clean energy opportunities in China.

You'll get in-depth research like this, along with up-to-the minute buy and sell recommendations. Take a few minutes to look over everything Green Chip International has to offer.

You can get a free book just for checking it out!