Clean Energy Is Too Expensive

One of the biggest arguments against clean energy alternatives is that they cost too much to integrate.

To those who continue to manufacture this lie, I offer a hearty F*** You.

Your argument is bogus and is facilitated by high-priced lobbyists who buy lawmakers as if they were cheap whores squatting on dimly-lit corners. Which of course, they are.

Regardless, the high costs associated with our reliance on dirty, conventional energy sources dwarf the costs to transition our energy economy to one that is both economically and environmentally sustainable.

To illustrate this point, go back one year to the BP Oil Spill which blanketed 1,053 miles of shoreline with crude. Wiping out entire ecosystems, the most recent estimate for this disaster is coming in at around $40 billion. And don't think for a second that figure includes everything. Because it doesn't.

Truth is, while BP reluctantly ponies up a few billion here or a few billion there – it'll never be enough to fully compensate for the damage that's been done.

From the death of mangroves which serve as nurseries for commercial marine species and protect against hurricane damage... To the health effects that will come to fruition as we are forced to remember that it's a long and nasty fall when you're at the top of the food chain... The grand total from this disaster will not be a small one.

But that's of little concern to those responsible for this disaster. In fact, in 2010, top execs at Transocean – which owned the Deepwater Horizon platform that blew up and touched off the spill – landed millions in bonuses for safety performance.

In case you're wondering, here's what “safety performance” looks like. . . 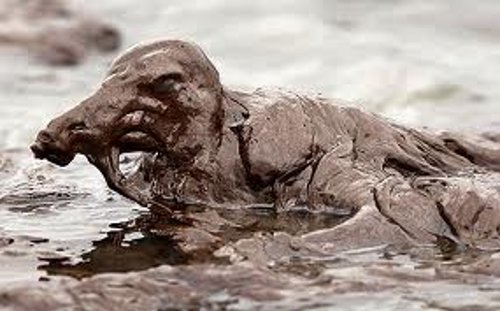 To BP, Transocean, Haliburton and all the scum politicians who enabled this disaster by choosing filthy lobbyist lucre over basic safety precautions that could've prevented this disaster – this is NOT over!