China, Singapore Plan the Next Eco-City

China and Singapore are collaborating in the design and building of a practical, scalable, and easily-replicated eco-city that takes on environmental protection, sustainable development, and resource and energy conservation...

By the year 2020, China plans to have 350,000 residents living within the world's first “socially harmonious, environmentally friendly and resource-conserving city”, called Tianjin Eco-city.

Located 150 km from Beijing and 40 km east of Tianjin city, the Eco-city will possess some of the most modern and popular energy-saving technologies: solar and wind power, rainwater recycling, and wastewater treatment/desalination of sea water throughout its 30 square kilometers.

Sino-Singapore Tianjin Eco-city has set explicit sustainability goals for the 2020 completion, including limiting carbon emissions (per unit of GDP); ensuring all buildings are built with green standards higher than the current national and provincial level; receiving at least fifty percent of its water from non-conventional sources; and having a share of "Green Trips" (walking, biking, public transportation like the light rail system) whose use exceed 90 percent. 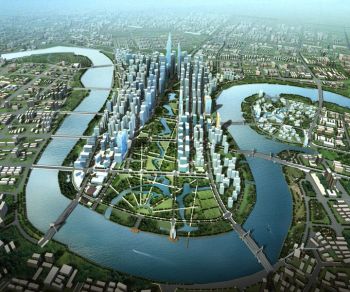 transit system will encourage citizens to utilize public transportation. Chinese officials hope as much as 90 percent of traffic within the city will take the form of public transport to reduce carbon emissions.

Tianjin Eco-city will  be divided into seven specialized districts with varying eco-landscapes: a green covered Lifescape, an Eco-Valley, a sun-powered Solarscape, an Urbanscape, an open Windscape, an Earthscape and Eco-Corridors...

The Lifescape will be surrounded by greenery and will have a series of soil-topped mounds acting as natural skyscrapers that will counteract the towering apartment buildings of the other communities.

The Solarscape will be located north of the Lifescape and will be the administrative and civic center of Tianjin City.

This city's most intriguing design is the Urbanscape, which will act as the core of the Eco-city. With stacked programs interconnected by sky-bridges at multiple levels to make efficient use of vertical space, the design resembles the ancient sprawling rice-paddies of Vietnam and the Philippines.

The city's Earthscape will have stepped architecture that allows for maximizing public green space. This area will act as the suburb of the city's Urbanscape.

Tianjin City looks to be the first step in the large-scale sustainable-city revolution... 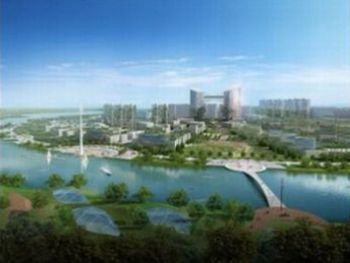 But ancient architectural aesthetics were not forgotten in the planning. With Chinese heritage of concern, the city's design by Surbana Urban Planning Group makes sure that the ancient village of Qingtuozi will remain intact within their Windscape sector.

The design for the development also takes into consideration the conservation rehabilitation of ecological wetlands and water.

The main centre of the Eco-city is located on the southern bank of a thousand-year old river course, which will serve the city in both commercial and recreational use.

"To build the eco-city in a harsh natural environment shows the ecological essence of the project," Lin Xuefeng, deputy head of the eco-city administration commission, said when the project was announced in 2008.

This is the second collaborative design and building effort between these nations, the first being the succesful co-operation of the Suzhou Industrial Park project, which promoted the use of garden landscape in Suzhou city.

Following completion, the Eco-city will be a model for other cities in China.

You can learn more about the project here.