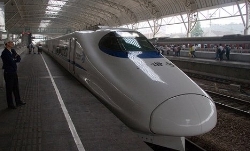 In an effort to expand its high-speed rail network (eventually linking Guangzhou with Beijing), China has delivered what looks to be the fastest rail link in the world.

Traveling at an average speed of 217 miles an hour, the Chinese have once again upped the ante when it comes to cleaner and more efficient transportation alternatives. In fact, China now expects to build 42 high-speed rail lines by 2012. Will they pull off such a lofty goal in such a short amount of time? Hard to say. But I certainly wouldn't bet against them at this point.

As for high-speed rail hopes in the US?

Well, we know the benefits.

According to the US Department of Transportation, high-speed rail consumes nearly 10 times less fuel than cars and six times less than planes.

And the Bureau of Transportation Statistics has indicated that while passenger air travel in the US gets about 45 passenger-miles per gallon of fuel - high-speed rail systems in Japan and Europe deliver efficiency equivalents of about 300 to 500 passenger miles per gallon.

There's plenty of data that supports the economic, social and national security benefits of high-speed rail. But despite the Obama administration announcing a new vision for high-speed rail (with a few billion in tow), we continue the debate - pushing us further and further behind the rest of the modern world.

Of course, that doesn't mean we won't ever make any headway on high-speed rail. But for now, if you're looking to invest in high-speed rail opportunities - you would be wise to focus primarily on the companies that are developing these systems in China and in other parts of the world.

In the meantime, if you want a real, honest analysis of high-speed rail, I strongly recommend reading this piece by my colleague Chris Nelder.

If you have any opinion on high-speed rail - positive or negative - this is a must read.