On July 1, the training wheels will come off Germany's world-leading solar panel industry. Will investors stay for the ride?

The feed-in tariff (FIT) that the biggest economy in Europe has used to stimulate its domestic photovoltaic (PV) market for the past decade is about to be cut by double digits. That move is partly a response to complaints from some constituents and conservative politicians, but Chancellor Angela Merkel and her center-right Bundestag (German parliament) colleagues hope to maintain market dominance despite the changes.

Here's how the drafted FIT shift breaks down:

The most dramatic shift we can expect in the second half of 2010 is a complete elimination of incentives for large solar panel arrays on arable land. State news agency Deutsche Welle reports that farmers have been crying foul about investors snapping up fertile tracts to "harvest the sunshine." MP Peter Altmaier, a leader of Angela Merkel's own Christian Democratic Union party, insists, "There must be no more panels installed on arable land."

Aside from that apparent inclination toward a total prohibition, the expected FIT changes for H2 are just that — expected.

Though the catchier headline may be to say that Germany's government is yanking the rug out from under its homegrown clean energy champion, the entire point of a feed-in tariff program is to phase the industry to grid parity with its fossil-fuel counterparts.

Coal and natural-gas fired power plants generate electricity for about 20 euro cents per kilowatt-hour. Under the FIT — which is set up to pay a premium for energy generated by photovoltaic panels (the same system can be applied to other sources) — Germany has already gone from a whopping 57 euro cents (c) per kWh in 2004 down to 39c now.

It's all part of a process initiated back in 2000, when the Bundestag passed its Renewable Energy Act. "Cleantech" hadn't dawned yet, and oil was far from record highs it reached later in the decade.

So Germany was ahead of its time and has reaped the benefits of a steroid-injected clean energy economy. Berlin's goal was always to wean producers and installers off the government juice, and that's what we're seeing now.

The come-down hasn't caused the German solar industry to fall flat on its face. Rather, companies like Q-Cells — whose facilities I toured in summer 2008 — are staying on their toes.

The FIT plan will be taken up again on Friday, at which point investors will have a more certain basis for what to do with their money. In the meantime, shares of Q-Cells (Frankfurt: QCE) rose on Tuesday, February 23, a day after draft FIT changes leaked.

Q-Cells investors turned bullish after the company announced that at the end of 2009, its cash position was nearly 65% better than they anticipated.

That stockpile leads me to believe that German solar companies are padding themselves for a blow. Their dominance as producers is due to the size of the market that was created by government mandates, not the other way around.

For installers at all levels — household, commercial, and large-scale "solar farm" developers — now is the time to get capacity in place.

It costs about 1 billion euros per month to subsidize new solar schemes, and relief for rate-payers must be part of the political calculation going into the finalized FIT cuts. However, the government maintains its target for 66 GW of solar power capacity by 2030 — up from 9 GW today.

Gordon Johnson of Hapoalim Securities thinks the less-than 3 GW per year growth that the 2030 target implies could set solar stock buyers up for a fall, since analysts have based estimates on higher annual increases.

The fact of the matter is that even German companies aren't putting their eggs in one basket these days. If anything, the government has done German solar panel producers the favor of forcing diversification.

The Desertec initiative to get 15% of Europe's electricity from North Africa by 2050 is being led by ten German companies, and in mid-February, Desertec CEO Paul van Son contrasted that undertaking with Germany's rural unrest over solar.

"There's a vast amount of sunshine" in North African countries like Morocco, Tunisia, and Algeria, points out van Son, "and there are vast amounts of space."

Germany is big, but of course it's much more fertile than the Sahara, and no one will tell you it's sunny.

On the other hand, Italy is making long strides toward grid parity between its solar capacity and fossil-fuel plants by virtue of its Mediterranean climate. Look for that country to draw some of the salespeople out of Germany after July.

The point is that international solar power companies — from polysilicon providers up to module makers  —all have their heads on a swivel right now. Average sales price (ASP) will be a concern as any national subsidy cut directly affects the money being pumped in from the top.

Long-term solar power bulls are in a good position here, as some stocks and funds like the Claymore/MAC Global Solar Index ETF (NYSE: TAN) appear oversold.

Here we see TAN's performance over the past six months, with a couple of my favorite technical indicators on top: 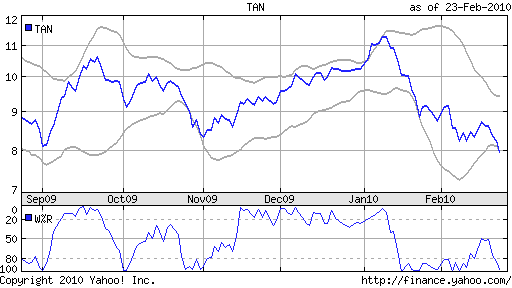 The Williams Percentage Range indicator gives a heavily oversold reading, and TAN is breaking below its lower Bollinger Band. You can see that the last time W%R was at this level, we didn't see a recovery... but reports about the German FIT were coming in unfiltered flurries at that time.

Now, we have more information, and it's reasonable for investors to look ahead at how companies will adjust to new subsidy conditions, rather than just freaking out and running for the exits.

I'll get back to you with even more complete information next week after the Bundestag session takes the FIT changes from rumor to reality.