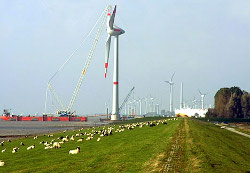 Back in October, we told you about N-Vision Energy's plan to invest up to $210.5 million to build a 100 MW wind farm in Bulgaria.

With very generous government incentives, the timing was definitely right to back a new wind energy development.

Of course, now it looks like those renewable energy incentives in Bulgaria have been so successful, the amount of new renewable power could end up putting too much stress on the grid.

Since government incentives kicked in, new wind, solar and biomass projects have totalled more than 11,000 megawatts. This is huge! But while we applaud the steps this former communist member state has taken to integrate more renewable energy in an effort to put the kibosh on new coal-fired power plants (and meet 2020 EU renewable energy targets), it is clear that Bulgaria needs to beef up its grid.

And until some headway is made on grid upgrades, state utility NEK has imposed a temporary freeze on connecting wind turbines in the Varna region. This isn't a major obstacle to Bulgaria's renewable energy integration goals, but it still needs to be recognized

It is unlikely that Bulgaria will sleep on new grid infrastructure construction. There's just too much at stake for that. But this kind of stuff isn't cheap, and there's no such thing as "quick turnaround" when it comes to building out new transmission.

So we'll keep you posted as more develops.