A few weeks ago, I shared with Green Chip Living readers the news of the new design for the St. Lawrence Market in Toronto...

The winner of a city-wide competition submitted a design proposal to revamp the antiquated marketplace to be a central part of downtown life in Toronto.

And two weeks ago, a farmers’ market in New Mexico unveiled a major upgrade as the nation’s first solar-powered market was unveiled. 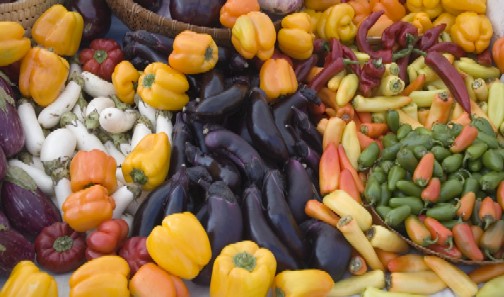 Albuquerque-based solar company CleanSwitch is partnering with the Downtown Growers’ Market and The Downtown Action Team to make the market completely solar-powered.

"There are four modules and they are 240 watts a piece so that is about one kilowatt all together restored in batteries and then converted from dc power to ac power. It's just like what you get out of a wall," explained a technician from CleanSwitch.

This makes the Market a perfect example for the public of how solar power can be utilized in community space, and with partnership of a local cleantech company…

What’s more, solarizing the market is an integral part of the Downtown Action Team and the Growers’ Market initiative and mission to make the entirety of food production, from planting to harvest to retail, possible via power from the sun.

The Growers’ Market is a “growers only” open air market which features 100% locally grown produce from within 60 miles of the market. Market goers can also find locally made cheeses, honey, flowers, fresh pastas and breads.

But some might ask the obvious question: Aren't farmers' markets already solar-powered, based on the fact that they're traditionally held outside during daylight hours?

Yes... and no. Like many farmers’ markets, the Albuquerque Market has booths with bakery-fresh muffins and coffee for shoppers…

At the Downtown Growers' Market, the espresso machines are powered by solar energy from CleanSwitch. And so is the ATM machine, as most people who buy their produce at farmers’ markets know, it’s “cash-only.”

Business is booming for growers who sell at local farmers' markets, and its prominence in small communities and big cities — Toronto and Albuquerque, to name two — supports the notion that the farm-to-table lifestyle isn't just catching on...

It's here to stay.

According to the U.S. Department of Agriculture, the number of farmers' markets operating in the United States has grown from 1,755 in 1994 to nearly 4,700 in August of 2008. Nearly 40% of farmers' markets have been operating for at least ten years, most more, despite the fact that they have grown in popularity in recent years.

One of the biggest draws for consumers to the produce available at a local farmers' market is shelf life. Produce that hasn't spent a long time sitting in a truck bed en route to the grocer will be fresher and retain nutrients longer. Farmers' markets also help reduce the carbon footprint involved in packing and shipping produce...

According to Farmers' Market Today, 37% of vendors travel fewer than 10 miles to get to their market; 35.5% travel between 10 and 30 miles. This means over 73% of farmers' market vendors regularly travel fewer than 30 miles to sell their wares at the weekly market.

How's that for sustainable transportation and shipping?

"Profitability is the primary benefit to farmers who sell at a farmer's market. By selling through this avenue, the farmer has direct access to the retail dollar. The farmer is still paying market fees, but generally speaking, a grower can expect to take home 90 percent of the retail dollar," explains the director of the Washington State Farmers Market Association, Zachary Lyons.

Famers might expect to take home just 10 percent on each dollar when selling produce to a packing house. This is why farmers' markets are good for the farmer, the consumer, and local economy on the whole.

Farmers' Markets are booming, and as more people look to spend time outside in the warm weather, eating watermelon, corn on the cob, and grilling vegetable kabobs, the summer months are a great time to hit the local market...

Someday, your local marketplace could have a solar-powered ATM, as well.