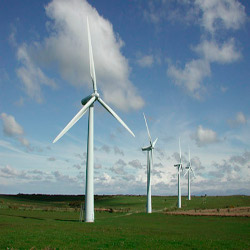 General Electric (NYSE:GE) announced today that it has received a $1.4 billion turbine and services contract from power producer Caithness Energy.

The turbines will power an 845 megawatt wind farm in Oregon called Shepherds Flat. When completed, it will be the largest wind farm in operation in the world.

The contract also marks the US debut and largest single order of GE's 2.5xl wind turbines.

According to Caithness Energy, the $2 billion project will inject $16 million annually of direct economic benefits into Oregon, and will employ 400 workers during construction, and 35 during operation.

Construction will begin next year, and the wind farm will be completed in 2012.