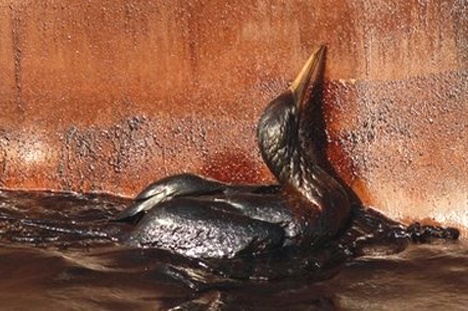 Geoff Morrell, BP's vice president of US Communications made an appearance at the recent Society of Environmental Journalists conference. He told the audience that the company's clean up efforts were obscured by “opportunistic” environmentalists and the sloppy work of environmental journalists.

I have to admit, it takes some pretty heavy stones to make such a declaration in front of hundreds of folks that you know likely questioned his appearance from the get-go. Nonetheless, Morrell's speech was typical of what you might find from an oil & gas apologist.

He blamed those pesky environmentalists for not properly covering the success of BP's efforts. Of course, I suppose success is relative If by success he means that BP's stock has recovered nicely since the spill, then yes, that's one hell of a success story.

Morrell also said that BP got out of solar because it's very hard to make money in renewables. You know, just because he wanted to use this opportunity to continue the myth that renewable energy is still inferior to conventional fossil fuels, despite evidence that it is quickly closing in on grid parity.

No, BP got out of solar because it was too incompetent to make it work.

Hell, BP had a lot more leverage and a lot more capital than some of the most successful renewable energy companies today. If SunPower (NASDAQ:SPWER), First Solar (NASDAQ:FSLR), SolarCity (NASDAQ:SCTY), and dozens of others were able to start from practically nothing and generate billions in revenue in less than ten years, why couldn't a well-funded behemoth like BP do the same?

The World is full of Junkies

Look, don't get me wrong. I'm not anti-oil. But to sit there and attack environmental journalists for reporting on one of the worst ecological disasters ever is ridiculous. I don't even know why BP cares anyway.

BP spent something close to $100 million on advertising and PR following the Gulf oil spill. I still don't know why they did that. BP, despite this horrible incident, wasn't going to disappear. It wasn't going to go under.

The world is full of junkies. We need our oil fix, and we need it everyday. Sure, the Gulf disaster may have temporarily caused some junkies to hit up another dealer on another street corner, but they always come back. They always come back!

So if BP wants to continue its pissing contest with environmental journalists, that's fine. But what a huge waste of resources.

In the meantime, I suggest that anyone concerned about the continued threats of oil spills should consider buying an electric car. Protest with your purchasing power, give the proverbial middle finger to your local filling station and most importantly, don't rely on the government to protect you against future ecological disasters. It's that kind of reliance that gets us into these messes to begin with.