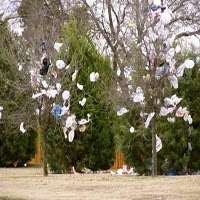 Polluters in Baltimore breathed a sigh of relief yesterday after the Baltimore City Council balked on any meaningful legislation that would reduce the use of plastic bags in the city. You know, the ones that decorate skeleton trees in the winter and float on the black glassy reflections of the Inner Harbor.

Not only have these plastic bags sucked a bit of the aesthetic charm out of Charm City, they also maintain an economic burden on the city, as removing these plastic bags from our water ways is not a free service offered by those who hand them out like paper towels at the grocery check out.

There was a proposal to charge consumers $0.25 per bag. But that was shot down. Instead the City is demanding the following:

Now don't get me wrong. I know that there are some folks on the City Council who have worked tirelessly to help clean up this city. And I applaud them. But clearly the lobbyists have won at slowing the progress on curbing plastic bag pollution. And you better believe that over the next year, they're going to go full force trying to convince us that plastic bag taxes are a bad idea.

But I'd prefer to look at the data, and ignore the rhetoric.

I'd prefer to look at Ireland, where a $0.30 plastic bag tax was passed back in 2002. Within weeks of the new tax, there was a 94 percent drop in plastic bag use. And for those who did shell out the thirty cents - about $9.6 million was raised and earmarked for a green fund.

And in China, after a ban on super thin plastic bags was introduced, plastic bag usage fell by 66 percent and saved the Middle Kingdom 1.6 million tons of petroleum. Because yes, all those wonderful plastic bags are made with petroleum. Want to cut our use of foreign oil? Stop using so many damn plastic bags!

Of course, I'm not so naïve to believe that this is an easy fight. The resistance has been strong. And the truth is, if you want to get anything accomplished in this world, you do have to make compromises. But how much longer can we "compromise" on this stuff?

These plastic bags have become an environmental and economic burden that no one seems to be willing to pay. So the way I see it, if you can't pay for something, then you can't have it.

It's not rocket science.

Although you're given these bags at your local grocery store, they are NOT free.

Just something to think about the next time the cashier at your local supermarket offers you a plastic bag for a gallon jug of milk or a candy bar!

To a new way of life, and a new generation of wealth. . .