47% of Meat in U.S. Tainted by Staph Bacteria

It's a scary week for meat eaters...

"Staph Bacteria Found in Half of U.S. Meat"

"US Meat and Poultry is Widely Contaminated, study says"

The results of a report published on Friday by the journal Clinical Infectious Diseases are buzzing on the Web and the evening news, warning consumers of widespread contamination in meat and poultry.

Nearly half of all meat in the United States tested by researchers tested positive for drug-resistant strains of Staphylococcus aureus.

They found strains of Staph bacteria in a whopping 47% of the meat they tested.

What's more, more than half of those contaminated samples were resistant to at least three different types of antibiotics, including methicillin and more common antibiotics like amoxicillin and penicillin.

“For the first time, we know how much of our meat and poultry is contaminated with antibiotic-resistant Staph, and it is substantial,” said Lance B. Price, Ph.D., senior author of the study and Director of TGen’s Center for Food Microbiology and Environmental Health.

So on top of E. coli and salmonella, carnivores can now add staph bacteria to the list of potential dangers that come with consuming meat from industrial animal farming.

Drug-resistant Staph is largely the result of overexposure.

The report pointed out that industrial farms and the methods of steadily feeding livestock low doses of antibiotics creates an ideal breeding ground for drug-resistant bacteria...

According to the Johns Hopkins School of Public Health, nearly 80 percent of all antibiotics sold in the year 2009 were reserved for livestock and poultry.

“The fact that drug-resistant S. aureus was so prevalent, and likely came from the food animals themselves, is troubling, and demands attention to how antibiotics are used in food-animal production today,” Price explained.

The bacteria has grown resistant to the drugs that would normally be used to kill them before they are available in grocer cases. This same untreated bacteria moves from the animals to the consumers who eat them. 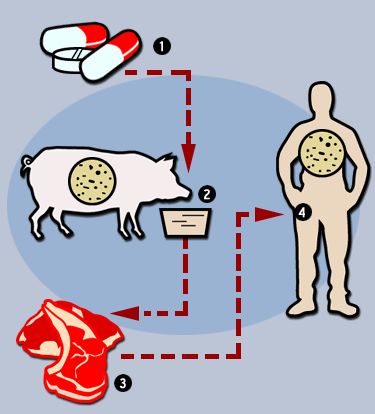 Surely you've heard of Staph before...

Staphylococcus is the general term for more than 30 strains of bacteria that can cause infections of the skin as well as food poisoning.

But the particular strain found in the meat samples during  research — Staphylococcus aureus — has been linked to more serious health ailments than skin rashes and infections, including respiratory problems, sepsis (an illness that occurs when the bloodstream is overwhelmed by bacteria), and endocarditis (inflammation of the inside lining of the heart chambers and heart valves).

It's pretty serious stuff, and yet Staphylococcus aureus is NOT among the four types of drug-resistant bacteria the U.S. government looks for during the survey of retail meat...

Those who are most susceptible to health problems associated with food contamination are usually children, the elderly, and those with weakened immune systems due to cancer and HIV/AIDS patients. The treatment of antibiotic-resistant infections is costly and difficult.

“Antibiotics are the most important drugs that we have to treat Staph infections; but when Staph are resistant to three, four, five or even nine different antibiotics — like we saw in this study — that leaves physicians few options,” Price said.

So what can consumers do?

And, quite simply, you might consider consuming less meat and poultry...

A diet of raw foods, fruits, grains, and vegetables that have not been juiced up on antibiotics is as safe a bet as any that you won't be ingesting a strain of Staph with your supper.